Above: Kerry McGinnis in the 80s – to the right arebeefwood and swamp collibah trees.

It’s a question they once asked new chums in fencing camps: What sort of Australian timber do you see most of? The neophyte guesses gum, wattle – but the answer is crooked. Posts and rails need to be straight.

Turning timber’s no different only this time the answer’s splitting. Especially in the north-west Gulf Country where the temperature (40° on bad days) dries the bark and drags the sap from the green wood literally while you watch. It’s a tough landscape and much of its timber – gidgee, ironwood, supplejack – will turn the blade of an axe. So it is galling to see the ease with which it splits.

The climate ensures that few of the conventional methods for slow drying, such as waxing or painting the end of cut logs, work. The wax melts off and the bark cracks open anyway. Incarceration in sawdust and plastic, I discovered, produced mould faster than rain grows weeds, while damp newspaper was equally ineffective. Memories of a visit to a timber yard eventually prompted a solution. Stacking the cut logs under a garden spray that played over them every day for six months did the trick. A few cracks appeared on the ends but otherwise they dried unsplit.

There is great biodiversity in the sandstone country of the western Gulf. The genuses of grevillea, hakea, acacia, melaleuca, eucalyptus and corymbia are well represented in everything from whipstick scrub to grand old trees (hollowed by termites and useless for turning but often with valuable burls.) The conkerberry shrub (Carissa lanceolata) with its orange heartwood is a prize, as is ebony (Diospyros humilis) with its elusive dyed heart as black as anthracite. 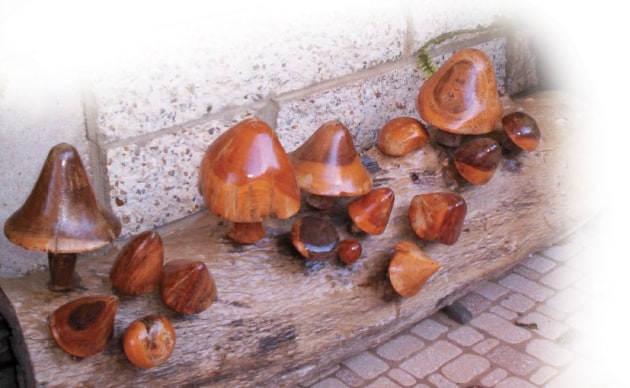 Some of the author's Toadstools turned from Gulf timbers

Every timber has its drawback—the red bloodwood (Corymbia pocillum) is brittle, the dark lancewood (Acacia shirleyi) stringy; and its strength – bloodwood polishes like a mirror, the heart of the lancewood resonates to a tap. And the tree the local Aboriginal people call boat tree, alone of those timbers mentioned, can be worked green. Growing on creek banks and watercourses within the sandstone country, its distinctively marked grain once adorned their dugout canoes. It neither splits nor pulls – no small consideration if you paddle through the estuarine crocodile’s habitat. It’s a long-lived tree, its new cut timber creamy white, with distinctive brown striations. As it ages the colour deepens to honey then tan, and many years later, to chocolate brown. Logs left under my spray arrangement however turned the colour of mould and had to be discarded.

In white-ant country beefwood (Grevillea striata) is the only deadwood worth picking up. Its natural oil seems to protect it from termite appetite while its singular grain is enhanced by a dark, thick, furrowed bark it takes a chisel to dislodge. The deep splits inherent in the dried wood give character to items crafted from this beautiful timber—one of the many rewarding and interesting trees amid a plethora of choice in the Queensland Gulf Country.

Kerry McGinnis has published two books on her experiences droving with her family and establishing a property in Queensland’s Gulf Country: Pieces of Blue (Viking, 1999) and Heart Country (Viking, 2001).