Grow your own red cedar

Above: Measuring the girth of a red cedar in the Albury Botanical Gardens iat over a metre in diameter.

Once classified as a distinct species, Toona australis, our Australian red cedar is now recognised as a local variant of the Asian red cedar (Toona ciliata). In its natural habit, large red cedar trees are usually only found in the coastal areas of New South Wales and Queensland, but the species may be much more tolerant than its rainforest habit implies.

There is a red cedar growing in the Albury Botanical Gardens which is now 104 centimetres in diameter! The largest planted red cedar on the National Register of Big Trees is in the Adelaide Botanical Gardens; Australia’s driest capital city. First recorded as being present in 1859, the tree has a clear trunk up to about six metres and was more than 120cm in diameter in 2010.

While 19th century gardeners were planting red cedar in city gardens, foresters in New South Wales and Queensland were trying to establish it in plantations on some of the best tropical rainforest soils. They failed spectacularly.

Their problem was the Asian cedar tip moth (Hypsipyla robusta). The moth lays its eggs on the tree’s leading shoot and the larvae burrow into the stem causing dieback of the leader. The insect rarely kills the tree but it does cause the release of secondary buds just below the original leading shoot resulting in a multi-stemmed tree.

These young, high-pruned, red cedar growing on a farm in Western Australia were white-washed to reduce the risk of sunburn.

Repeated attacks cause multiple deformities destroying the form of the tree for timber production. The difficulty for growers, even those well away from any affected trees, is that the moth appears to have learnt to sense the chemicals produced by a healthy red cedar tree as it puts on a spurt of height growth.

Once inside the stem, the insect is impossible to control using contact insecticides. Even systemic chemicals have shown limited value, particularly in larger trees. Research is exploring the potential of using artificial pheromones to trap the male moths, or at least make it hard for them to find their females – a method that is commonly used to control codling moth in apple orchards – but so far scientists have been unable to unravel the complex chemistry of the attractants released by the red cedars.

The presence of large, straight red cedars growing alone in mixed species rainforests led to the suggestion that planting the trees under a canopy or in mixed species plantations may reduce the incidence of attack.

Young red cedars are shade tolerant and height growth can be as fast under a canopy as it might be in
full sunlight; often better if frost or dry winds are a problem. However, diameter growth under shade is restricted, leading to tall slender trees. To achieve sawlog size, the trees would need to grow up through the canopy into full sunlight, as it often does in a rainforest, or the competing overstorey would need to be removed. 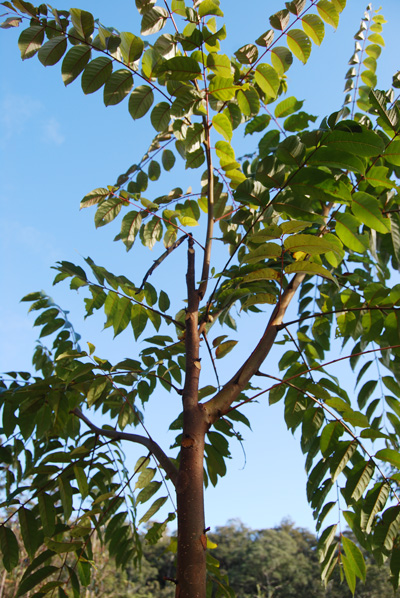 Tip moth damage to this young red cedar tree has resulted in a secondary leader.

I planted my first red cedars on our Victorian tree farm in 2006. I had no idea how they would perform. Fortunately, we don’t have the tip moth. Last year I finished pruning one of our ten-year-old red cedars up to eight metres. It was perfectly straight.

My stem pruning regime involves removing all the branches up the stem every winter to a point where the trunk diameter is about 8cm. This will ensure I produce knot-free wood from the trunk. The final pruned height will vary depending on how well the trees grow. Being so valuable I would be happy to achieve a three or four metre pruned log, any more is a bonus.

To ensure I grow a quality log I only prune straight trees. Red cedar is a phototropic species; meaning that the leader will tend to grow towards the light. In a rainforest, this allows the tree to bend towards any small gap in the canopy. That’s fine for survival, but the resulting bend in the stem reduces its value for timber. 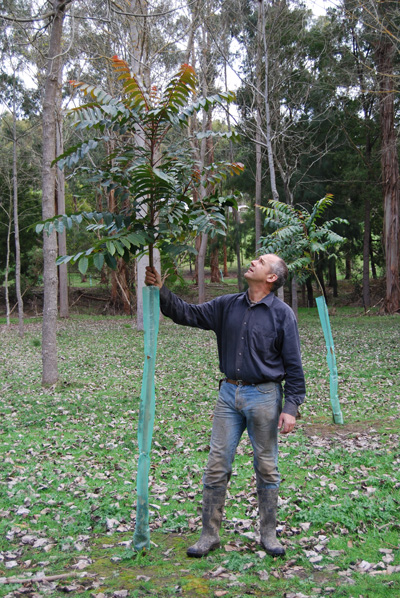 Young cedar in author's own plantation.

Fortunately, I’ve found that red cedar coppices well so if a young tree is malformed, I just cut it off at ground level and grow a new trunk. I now only plant red cedar in full sunlight or the light shade of a eucalypt canopy. In both cases, I’m achieving good straight growth on most stems.

Growing red cedar in full sunlight has its own risks including, surprisingly, sunburn which can occur late in the dry season. The damage isn’t evident at first but as the cambium dies, the bark peels off leaving a long thin scar down the western side of the tree.
Friends in Western Australia are growing red cedar on their farm near Bridgetown. I visited in early spring last year as their trees were just coming into leaf. They had painted the stems white. Walnut growers do the same to their trees to reflect the heat off the trunk.

I don’t know if the cedar tip moth will ever reach our farm. Given the changing climate and increasing interest in growing the species in Victoria, it probably will. Meanwhile, I’m planting as many red cedars as I can, testing how the species performs on a range of soil types, from our best alluvial creek flats to our heavy wet clays and free draining sands, and in mixtures with different species.

It seems to do well on our heavy clay soils. I am now confident I can maintain a diameter increment of about 1.5cm per year which suggests I might be harvesting 60cm diameter logs at age 40 years. But, to do that I will need to provide an average of spacing between mature trees of about 12m for the canopy to spread.

But what of the wood quality of a fast-grown, red cedar? Whilst there is little scientific research available, there
is some experience. A plantation on the Atherton Tablelands was thinned in the 1990s and the timber sold at auction with promising results. Whilst the sapwood of the fast-grown trees was wider than that found in a similar sized native forest tree, the wood density and colour were encouraging.

Like English oak, Toona ciliata is ring porous so the wider the growth rings the higher the wood density. Keith Bootle implied as much when he wrote of red cedar in his book Wood in Australia: ‘Fast-grown timber seems to have at least as good, probably better, mechanical properties than the average material from large logs’. 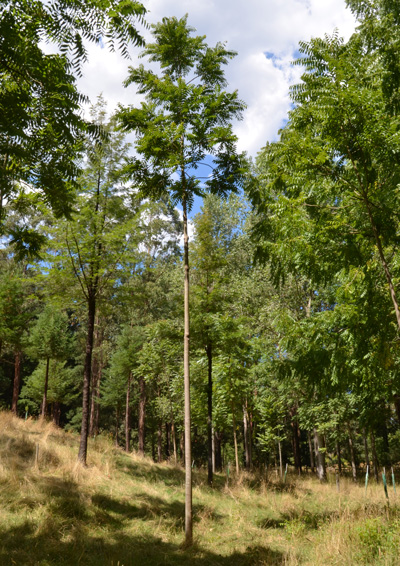 Australian red cedar has been grown in plantations overseas with mixed results. The timber harvested from a
plantation in Hawaii was rated poorly due to problems of growth stresses and knots. Red cedar is a hardwood so, like a eucalypt, it will develop tension wood in tall, skinny trees. Had the plantation been thinned and pruned the trunks would have been larger in diameter and clear of knots.

Red cedar is a promising option for farmers outside the natural range of the tip moth. It’s ironic to think that the future of this valuable tropical Australian native timber might be on farms in Victoria, South Australia, Tasmania and Western Australia.

Rowan Reid is a forest scientist with over 30 years’ experience growing special timbers on his farm. He has written many books including ‘Heartwood: The art and science of growing trees for conservation and profit’ and hosted over 10,000 visitors to his farm. Contact him via www.agroforestry.net.au