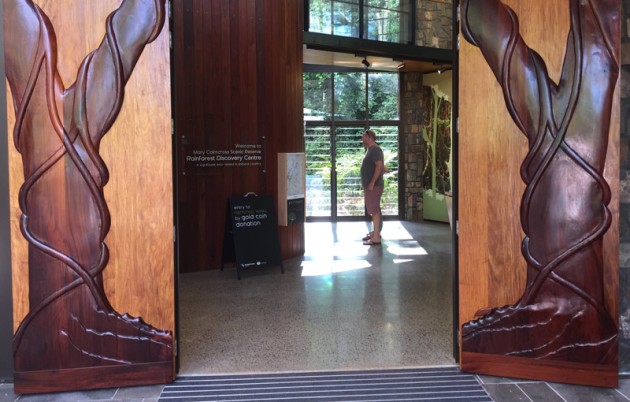 Situated atop the steep southern end of the Blackall Range, the Mary Cairncross Scenic Reserve consists of a 55ha isolated remnant of the subtropical rainforest that once covered the Blackall Range and Maleny Plateau. At an altitude of 420 metres, it offers outstanding views of the Glass House Mountains.

Mary Williamina Cairncross, born in 1848, was a passionate environmentalist from an early age. She married Irish-born Andrew Joseph Thynne on June 3, 1869, in Brisbane. He bought the Maleny land where the reserve is situated in 1902. 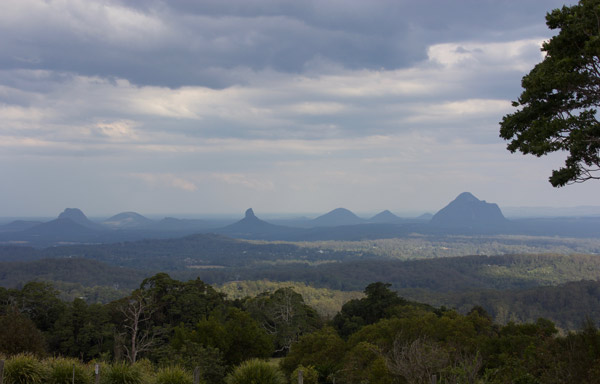 Mary, Mabel and Elizabeth Thynne donated the rainforest land to the then Landsborough Shire Council in October 1941 in memory of their mother and "for the preservation, conservation and exhibition of the natural flora and fauna”. The Rotary Club of Maleny began developing the park in 1959 and it was officially opened on December 1, 1960, by then governor Sir Henry Abel Smith.

A new facility to allow the public to be educated about the flora and fauna of the Mary Cairncross Scenic Reserve had been on the political agenda for many years. The new “Discovery Centre” would also, in architectural terms, reflect the history and themes of the rainforest.

When the project was finally announced, the Blackall Range Woodcrafter's Guild was keen to take part in the project. We were alerted to the fact that some trees in the reserve were going to be removed to make way for the new structure and this became an even greater incentive to feature local wood in whatever the Guild might be asked to create. Eventually, the architects on the project, Guymer Bailey, asked the Guild to make the entry doors for the new Discovery Centre.

As the Guild had previously made the Maleny Community Centre (MCC) entrance doors (see the story in Australian Wood Review issue 80, p.30), clearly we had achieved a reputation on the Blackall Range for making beautiful doors. The MCC doors were a carved forest of trees in Queensland Red Cedar on Red Cedar veneered flush panel doors. 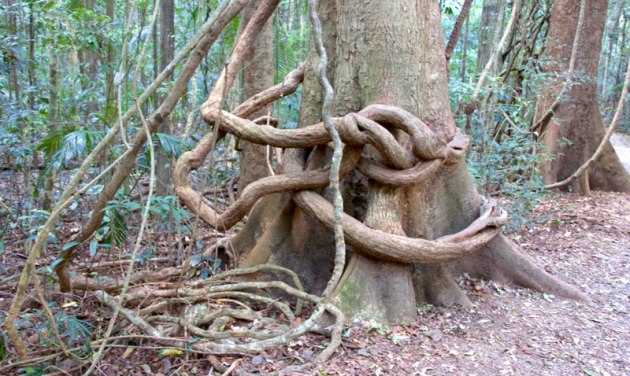 For this new project, our resident designer and master carver, David Southern came up with a design featuring trees from the Reserve with the strangler fig (Ficus watkinsiana) and wonga vine (Pandorea pandorana), both common in the reserve, growing on the trunks.

As the reserve has also a lot of beautiful Queensland red cedars (Toona australis), and this wood is an ideal carving species, it was decided to again use it as the main carved feature.

The next question was what to use as the substrate? It was considered that because of the environment in which the doors would ultimately be installed, i.e. partially exposed to the elements, a flush panel door using a plywood veneer would be unsuitable. A solid timber substrate in a durable and stable species would be more appropriate. New Guinea rosewood (Pterocarpus indicus) was chosen as stable and durable and it was felt the natural beauty of this wood would complement the rich colours of the old-growth cedar. Sawn wood in this species was readily available from Brittons Timber at Narangba.

The Making of the Doors

David Southern led the team to make the cedar blanks and the carving of the trees while John Muller arranged for the specification and manufacture of the substrate panels. With the past experience of the MCC doors and the incredible volume of dust generated by power carving and sanding, it was decided to borrow the SES marquee and erect it on the spare tennis court at the Montville Sports Ground for the carving of the red cedar portion of the project. This provided shade and a safe workspace for the carvers. 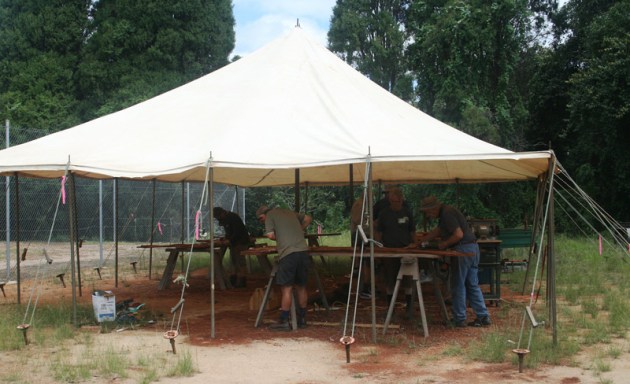 Dave’s drawings had been blown up to actual size by a printer and were then glued to MDF boards for final checks for size etc. to act as templates. 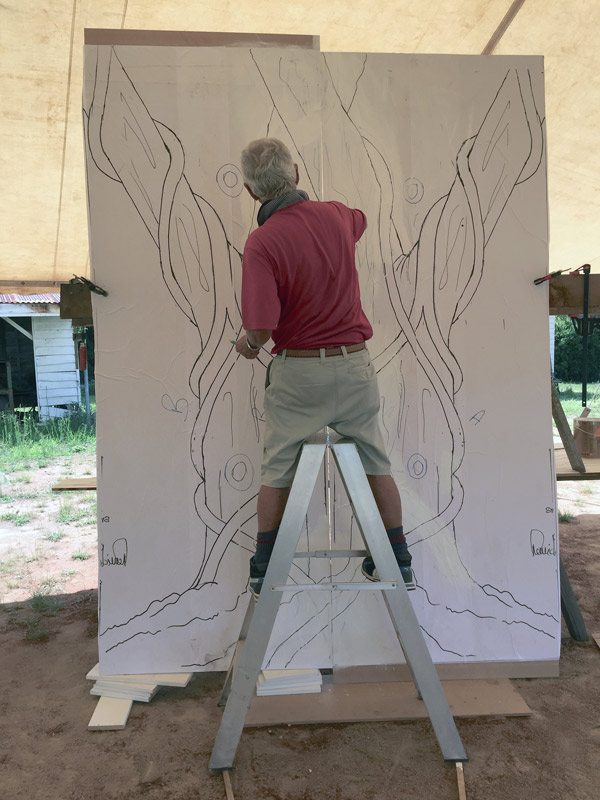 The red cedar boards, having been dressed to the required thickness, 35mm, were grain matched to suit the patterns.

When all were happy with the matching, the boards were assembled and glued  together with Titebond 111 to form the blanks for carving.

These blanks were then planed to remove glue squeeze-out and the finalized paper patterns were glued to the top surface and the blanks trimmed with a jig saw. 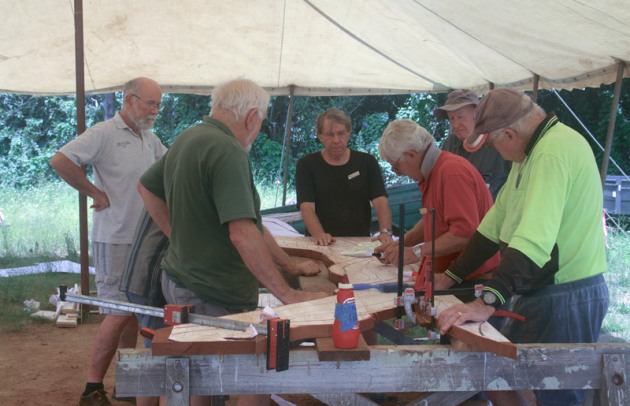 And so begins the arduous job of removing the excess timber using Arbortechs, grinders, sanders and chisels. 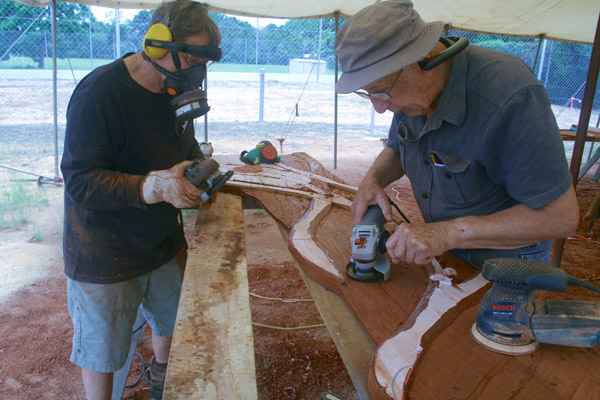 Once the excess is removed, its down to the painstaking detail work that requires a high level of
concentration……..

And finally the carvings are ready. 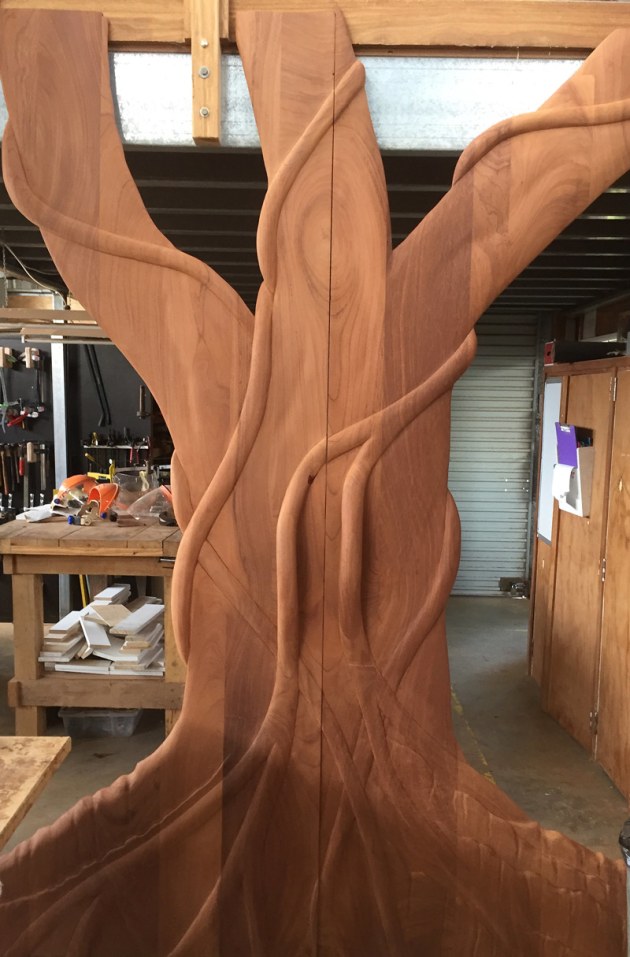 Meanwhile back in the workshop the Rosewood for the door panels has been dressed and jointed using the Domino Jointing System and glued with Titebond III, a highly moisture resistant adhesive. Boards used were ex 50mm and the finished substrate was 35 mm.  The reason for this waste (i.e. losing 15 mm of shavings in the process) was to compensate for the need to be absolutely sure the sawn timber would be straight after machining. Rosewood, whilst very stable when dry , notoriously can have twist and bow after kiln drying.    For stability of such wide panels, a 25 mm square, hollow section steel bar was embedded in the top and bottom of each panel. This was done because of the semi-exposed position of the entry to the Discovery Centre; the doors would be exposed to some morning sun. 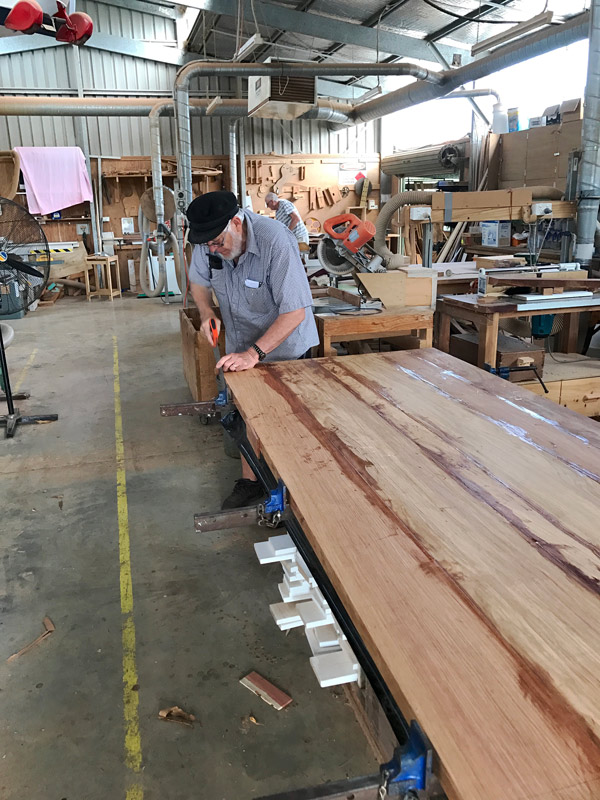 A final sand and then its time to start adding the carved panels……. 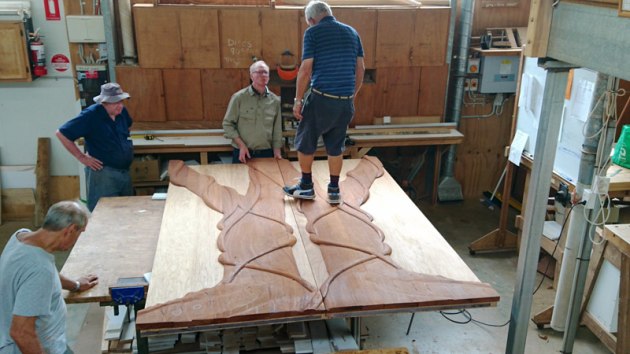 After the panels were checked and trimmed to suit the doors, the panels were held in place and the lot given their first coat of finish. This prevented the Rosewood substrate from being stained in exposed areas by the Techniglue Epoxy Adhesive used to adhere the carved panels. Any squeeze out could simply be removed with a cloth.

After rubbing back, Dave applied three coats of the final finish, Feast Watson Spar Marine Varnish which contains an ultra violet inhibitor. The doors were then rubbed back with 0000 steel wool and given a good coat of carnauba wax. 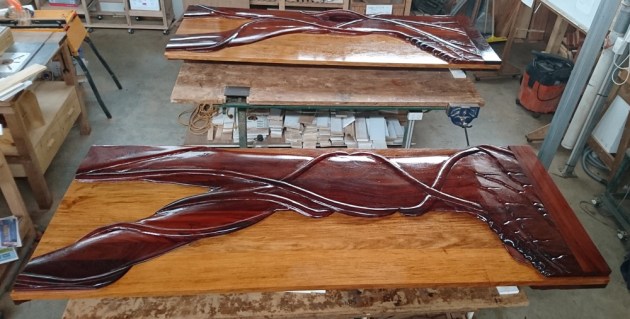 John Muller, President BRWG commented: “This type of project in a club such as the Blackall Range Woodcrafters Guild has an enormous benefit in developing healthy team spirit within the membership and lifting everyone’s skill levels. The dedication shown by those participating in the project was tremendous and very rewarding. In all, about 1000 hours of labour went into the manufacture of the doors." 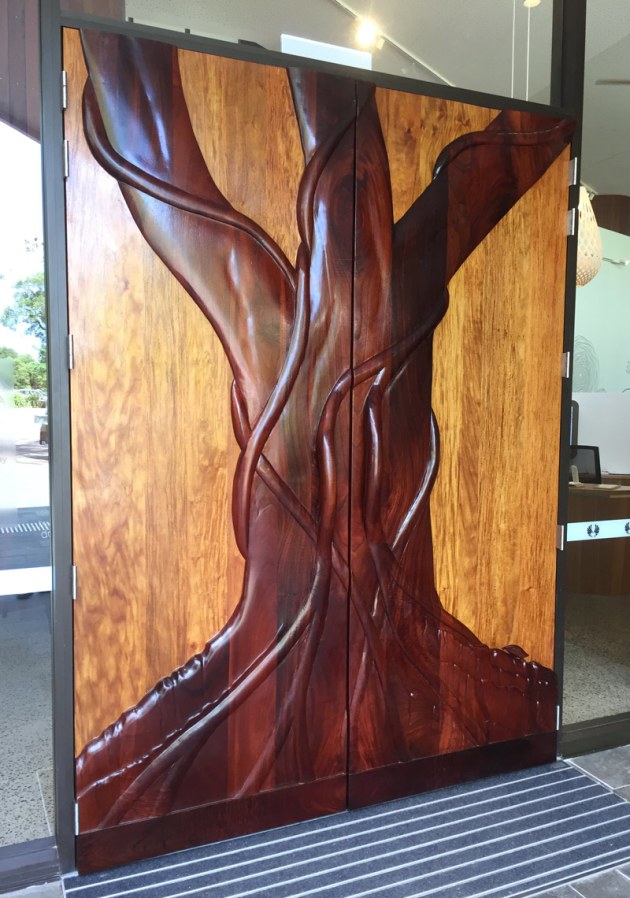 There was a financial benefit to the Guild also. Whereas the MCC project was done with community financial support to pay for materials etc, this project did attract revenue in the form of all material costs being met by the owner of Mary Cairncross, the Sunshine Coast Regional Council, as well a contribution towards the Guild's Building Fund. This was indeed a recognition of the craftsmanship and skill of the members in producing a very real and functional piece of art in the form of the entrance doors.”