As a turning project, spheres can be something of a challenge, especially if you want them accurate enough to withstand the scrutiny of a micrometer. Long term, a wooden sphere is never likely to withstand such scrutiny, given that wood will swell and shrink with seasonal humidity.

Even if you turn a perfect sphere, the surface is inevitably distorted as sanding proceeds, given that varying grain direction ensures that some sections are harder that others. Despite that, less than perfect spheres will still roll easily and in any direction, and be more than adequate as balls for games like croquet or skittles. As decorative objects, they’ll need to sit in a dip to prevent them rolling away.

Turning spheres requires, above all, accurate measuring. The finer the pencil lines you can work to, the better. Here the lines are much thicker than desirable so they show up in the photos. If your spheres are to remain spherical, use dry wood, and preferably dry wood known for its stability like camphor laurel, jacaranda, Huon pine, or the ash and silky oak I’m using here.

Initially you mount the blank between centres or in a chuck with the grain lying parallel to the lathe axis. The blank needs to be at least 15mm (9/16") longer than it is wide. The extra allows for waste at each end, where the centres press into and damage the endgrain.

Step 1: Begin by turning a cylinder the diameter of the sphere you want to make. This ball is 100mm (4-in.) diameter. Larger blanks will need to go between centres, whilst smaller blanks can go into a chuck so you can get at the endgrain at the tailstock end. If the blank is in a chuck, flatten the end and check it with a straightedge. 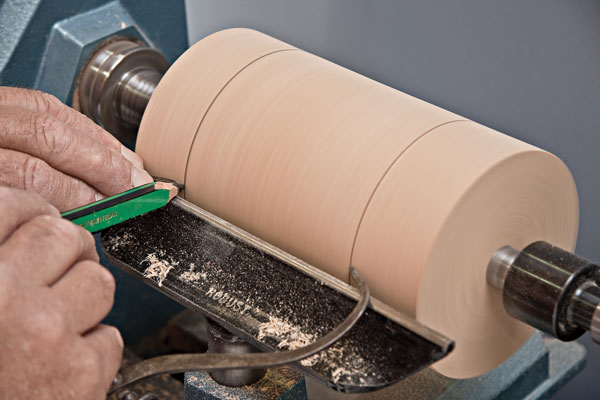 Step 2: Create a cylinder equal in length to the diameter. Mark the exact diameter of the cylinder as a length on the cylinder, then define this by parting straight in at either end. Make sure the cylinder is in the centre of the blank, so the marks left by the centres each end can be removed later. If the blank is in a chuck, flatten the end and measure from that. 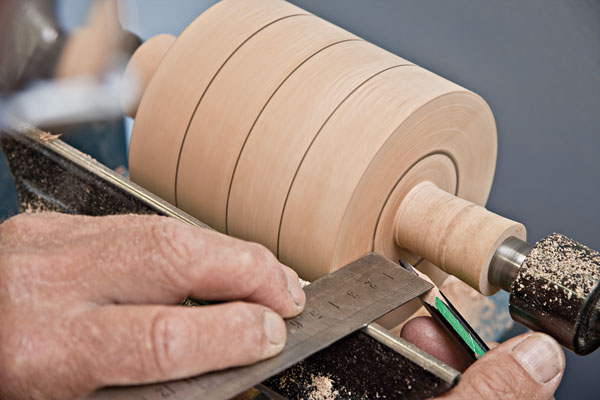 Step 3: Having turned a cylinder equal in length to the diameter, mark centre and then sub-divide the two halves in half. The finer the lines, the more accurately you can work, so 4H pencil is better than a 3B. So on this 100mm cylinder the lines are 25mm apart, which is 1-in apart on a 4in. cylinder. On endgrain, divide the radius in half. Measure in from the rim if between centres, or more accurately from centre if the blank is in a chuck. 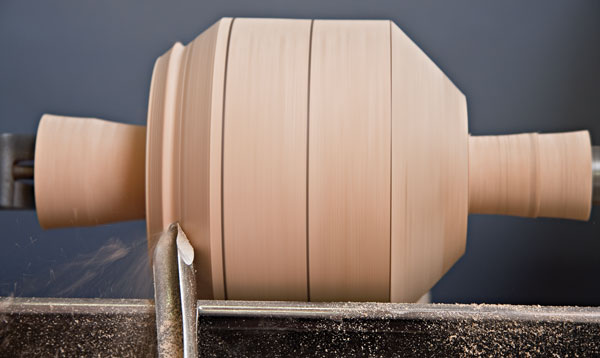 Step 4: Turn flat facets between the lines either side of centre and the circles on endgrain. This is centrework, so all cuts should be from larger to smaller diameter. Use either a skew chisel or spindle or detail gouge to shear cut the facets. Check the facets are flat and try not to overshoot your pencil lines as this will reduce the diameter of your ball. Once the facets are done, reduce the diameter of the tenons at either end in preparation for removal. 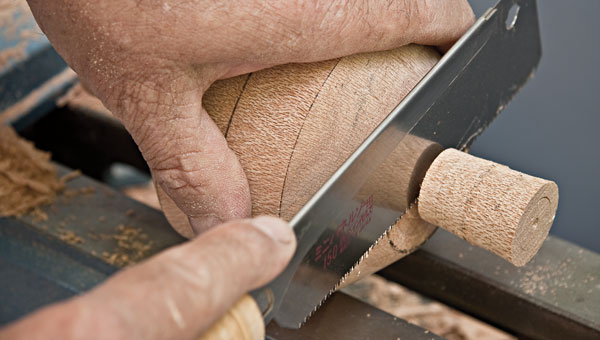 Step 5: Saw off the tenons at either end. 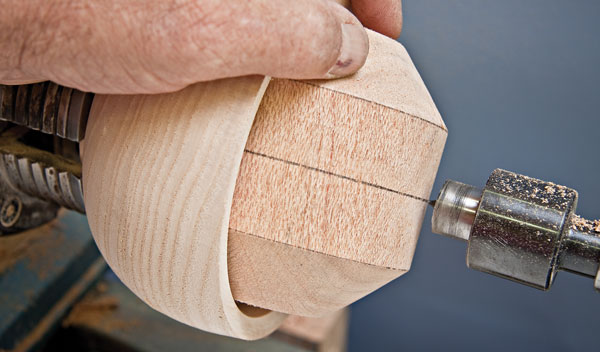 Step 6: Turn a jam chuck to hold the part-turned sphere. The blank for the chuck needs to be about one-third larger in diameter than the ball, and two-thirds of the diameter in height. Here I’m using roughed bowls for re-chucking rather than a fresh lump of solid wood. Turn the inside with a slight taper so you can press-fit the part-turned ball into the chuck. Align the original centreline with the tailcentre. Don’t wind the tailcentre in as that damages the wood. 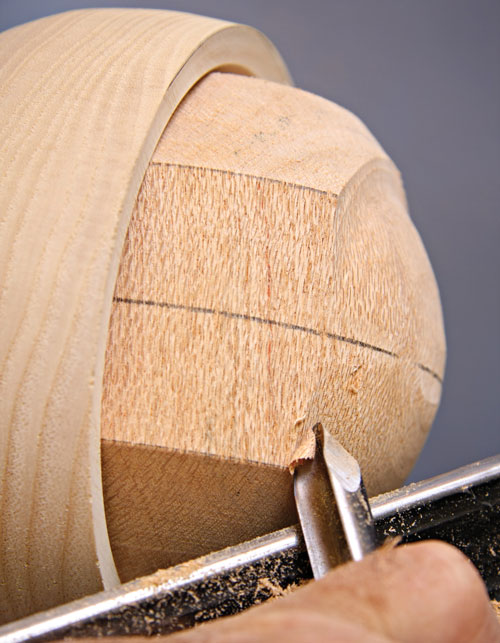 Step 7: The idea now is to turn down to the original centreline, retaining the line whilst removing the flats either side. Before you re-chucked the blank you were spindle turning, now it’s facework and a different set of cutting techniques with the cleanest cuts from the smaller to larger diameter. Most of this can be done using a 1/2” spindle gouge. You can hear when a spherical shape is achieved, but it pays to feel the surface between cuts as well, stopping the lathe for a visual check. Where I’ve cut slightly too far, there’s a gap in the line.

Near the chuck, I prefer to use a skew chisel flat on the rest as a scraper, because the long point can reach under the rim of the chuck. You’ve turned a hemisphere when you retain the pencil line but no flat sections. Sanding will further reduce the diameter, so the hint of a flat either side of the centreline is less of a problem than gaps in the line. 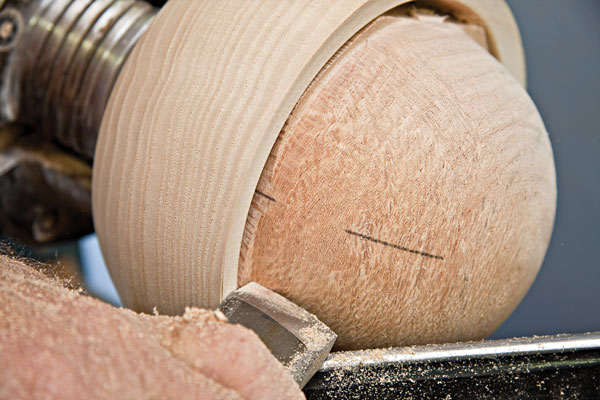 Step 8: Make a chuck to hold the hemisphere. The chuck needs to be very slightly smaller than the diameter of the sphere and slightly tapered internally. Jam the half-completed sphere into the chuck, (photo 9), again having aligning the centreline with the tailcentre. 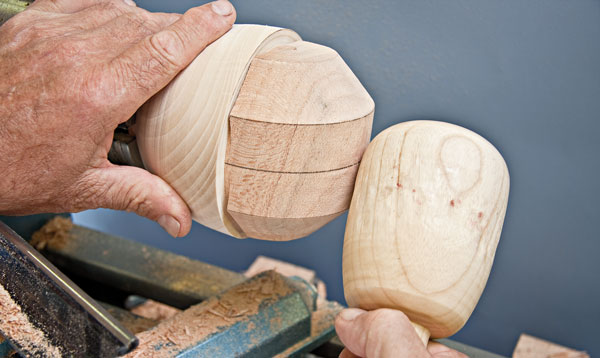 Step 9: Repeat Step 7, again aiming to retain the centreline with no flat sections. 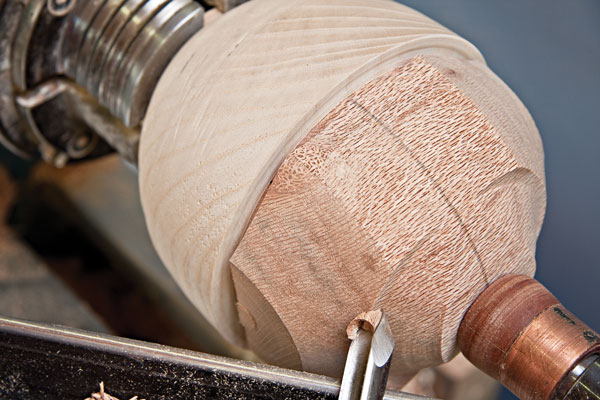 If you are worried about heaving the ball out of the chuck you can initially bring up a flat tailcentre, (photo 10). 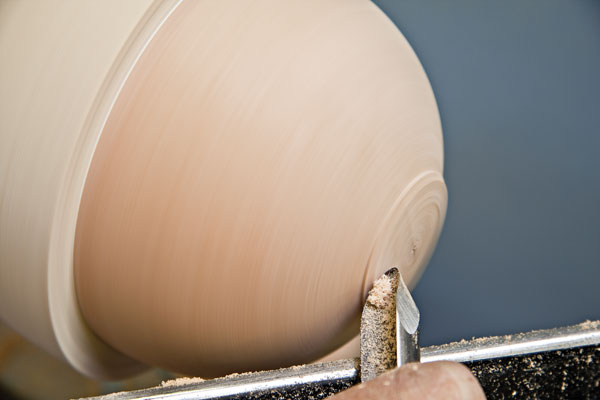 These are commercially available, but turning one to fit over your tailcentre makes for a nice little project that often comes in handy. Finally you will have to back off the support so you can complete the turning, (photo 11). 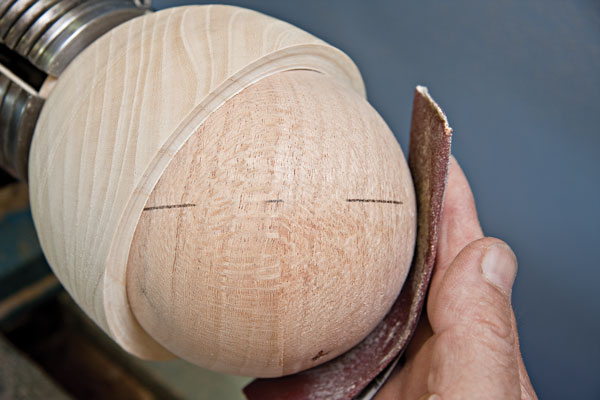 Step 10: Sand the sphere, (photo 12). The less you sand, the more accurate your sphere will be. Sand only for three or four seconds at a time before re- aligning it in the chuck. It’s tedious but worth it to avoid facets developing.

Spheres too big for chucks 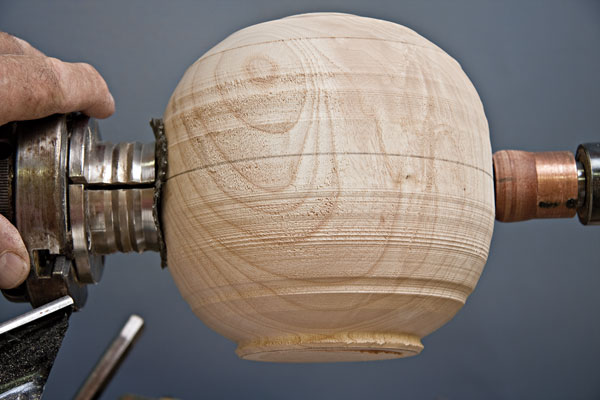 If you arrive at Step 6 and don’t have a suitable bit of wood or roughed out bowl for a chuck, you can mount your embryo ball between centres, (photo 13). The key is to align the original centre line on the lathe axis. Here I gauge this by lining up the pencil line in the centre of the gap in the chuck jaws at the drive end. At the other end I have lines marking the position of the diameter on the slightly concave tailcentre cap, and use those. You need to wind the tailstock in tight to keep the ball pinned between the cup centres. Between the chuck jaws and the wood is a circle of non-slip cloth, partly to protect the wood from the jaws, but mostly to provide extra grip. 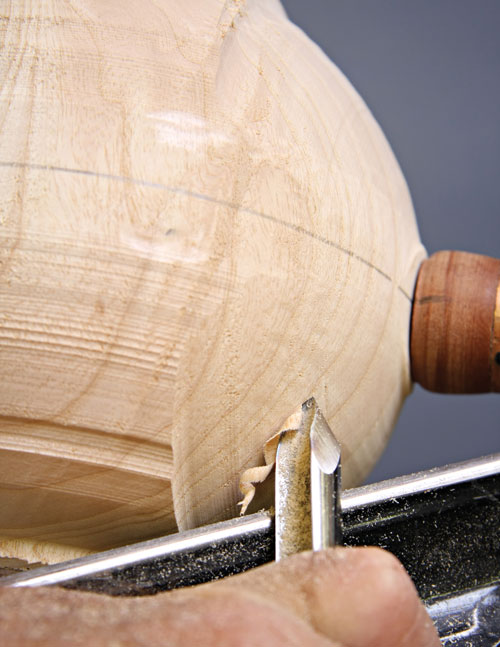 Turning then proceeds in exactly the same way, but on a larger scale (photo 14). On larger pieces like this ash sphere, shear scraping (with the edge tilted up) usually produces the best surface off the tool. 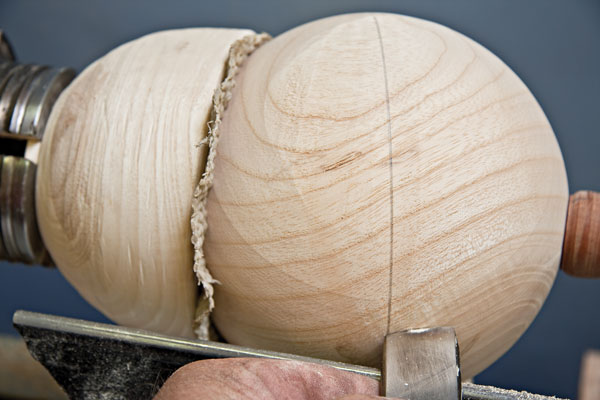 To clean up the flat section that had been covered by the centres, I used as a drive the 100mm chuck in which I completed the silky oak ball (photo 15). Again I had some non-slipcloth for a better drive and to protect against the friction burns that would occur had the wood been against wood.

Richard Raffan is a Canberra based woodturner and author of several woodturning books. Photos: Richard Raffan