When a tree was recently cut down at my school, I seized the opportunity to develop some new bowl forms. The majestic 80 year old southern mahogany (Eucalyptus botryoides) located right at the centre of school grounds was deemed dangerous by arborists. When the tree fellers arrived I was on hand to save the larger sections for lessons in green woodturning.

Here was an opportunity to go back to basics and do some production bowl turning using green timber. Students could see a how simple blocks of salvaged wood with a sentimental connection could be converted into bowls. 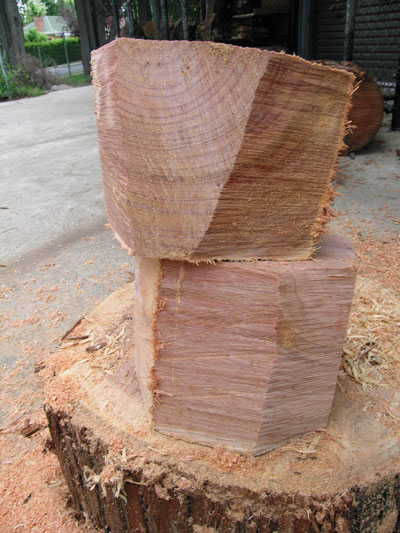 1. The green eucalyptus timber was cut by chainsaw into 250mm diameter sections.

Sections of wood were cut to size using a chainsaw [photo 1]. Generally I aimed for squarish pieces of about 250mm diameter that avoided the centre of the tree, which would be likely to split. I needed to consider the capacity of my lathe first, and think about the intended form later.The pieces were cut so they could be turned with the grain running at right angles to the lathe’s axis, for making cross-grain bowls. The blanks are slightly tapered and roughly shaped to reduce the workload on the lathe.

There are a number of ways stock can be mounted on the lathe. You may screw a faceplate directly onto the blank using self drilling or pozi-drive screws, or mount material between centres just as you would if spindle turning. For these pieces I chose to go with the second option, as it allows the blank to be re-centred if it isn’t balanced initially. Sometimes you may want to feature a certain aspect of the wood, and this method allows for repositioning as often as required before achieving the desired form. 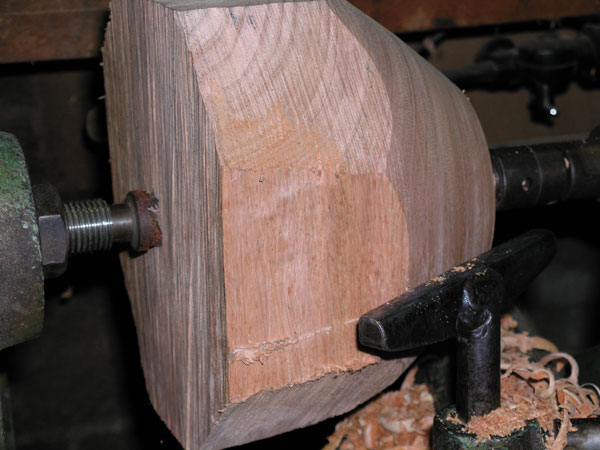 2. The blank is mounted for rough turning.

Starting at a low speed the blank was roughed with a deep-fluted bowl gouge (because the grain is not aligned parallel to the bed like spindle work), and reduced to a trued form. Photo 2 shows the blank mounted and rough turning started. As material is reduced, you may wish to crank up the lathe, increasing RPMs so that waste material can be removed faster. A solid lathe like an Omega Stubby or one bolted to the floor will tolerate much faster speeds without vibrating or ‘walking’ than a free-standing lathe. A variable speed lathe also helps you find an optimum speed at which the wood spins freely and doesn’t cause the lathe to shake, rattle and roll. 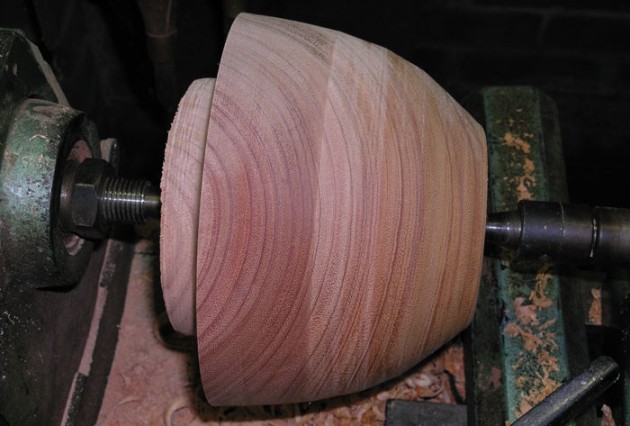 3. The rough-turned blank ready for forming.

Once roughed [photo 3], you can concentrate on outside form. To find a visually balanced form takes time. Experience certainly helps. Read books on bowl design and on ceramic forms, looking at profiles created as ‘classic’ examples. I find inspiration in Islamic dome forms, minaret profiles and full-bodied curves that sit comfortably in the hands. Some people suggest form is best viewed by blanking out features of the wood and focussing on the outside shape. This can be achieved by holding the form up to the sun or a bright back-light so that you only see an outline. 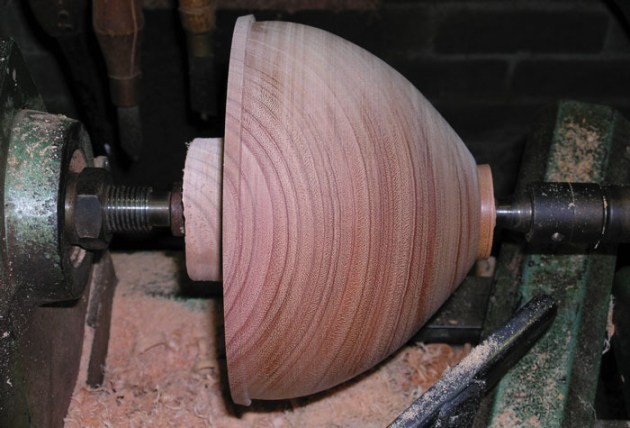 4. A spigot is left on the base of the bowl for fitting to a scroll chuck.

In this case I allowed some waste stock at the bottom of the bowl [photo 4] where I could turn a spigot that would later be held in a scroll chuck. But before moving on, I finished the outside surface. I didn’t want the grain to dominate, so I textured this area. 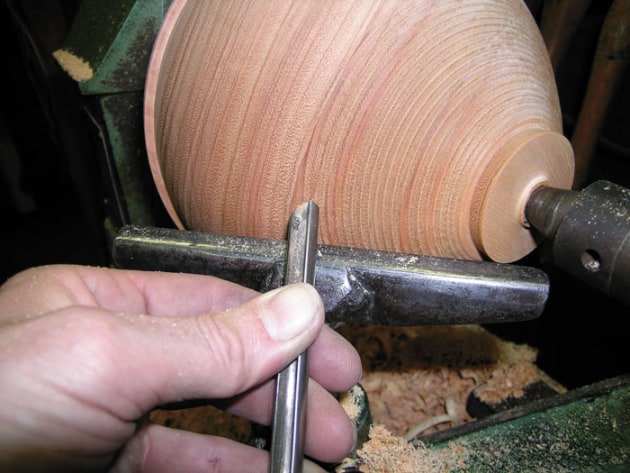 Using a small bowl gouge [photo 5], I cut a series of shallow grooves around the bowl’s exterior. This eliminates the need for sanding, and adds a textural/tactile interest to the bowl that highlights the form rather than the grain. 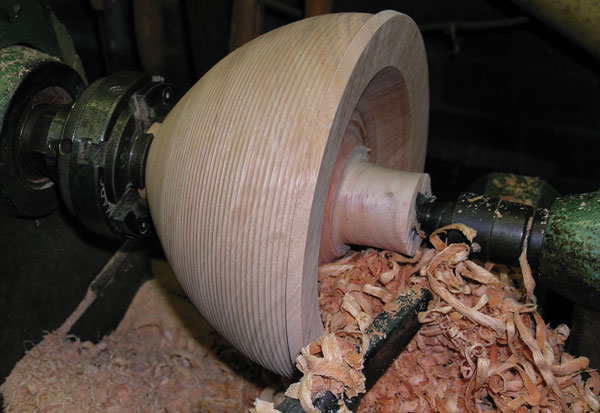 6. The bowl is supported by the tailstock during initial hollowing.

The bowls were transferred to a scroll chuck to enable hollowing. Photo 6 shows how you can use the tailstock to add support in initial stages of hollowing. I use a variety of tools depending on the depth of the bowl. Stewart system lances and shear scrapers enable deep hollowing, as do Kelton hollowing tools, but most often a deep fluted bowl turning gouge will do the job. I find the greatest asset in hollowing the interior of a bowl is a long, solid tool rest. 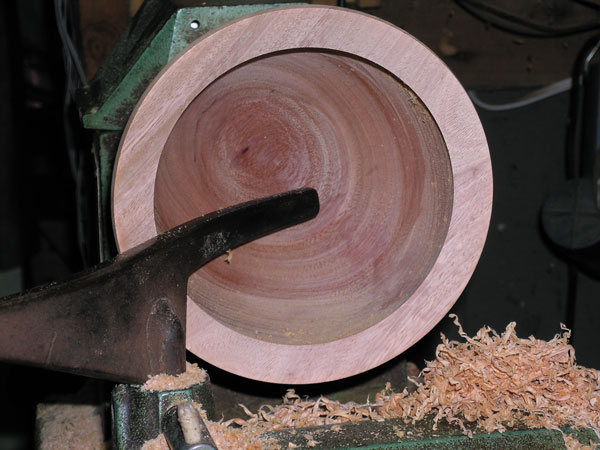 7. The author’s curved custom-made tool rest can extend 130mm inside the bowl. A lip on the top of the bowl provides an area for decoration.

I haven’t found a commercially manufactured one that beats one I made years ago. It’s about 65mm high and 12mm thick, and is bent to a gentle curve that reaches about 130mm into a bowl [photo 7]. We all have our favourites, and prefer those little accessories we made ourselves—this is one of mine.

Once hollowed the interior was sanded using a series of abrasive grades from 100 through to 320 grit. I use a number of sanding methods, depending on the surface left by the tool. This is often influenced by the wood I’m turning. Some options are abrasive fitted to a sanding pad held in a standard electric drill or an angle drill. Vic Wood rotary sanders also work well. I often use a combination of methods. The basic idea is simply to hold the sandpaper onto the wood as it revolves. Some turners may recommend other methods, so experiment and see what works for you.

I like to leave a lip where the outside form meets the top of the bowl. This gives me a ‘canvas’ onto which I can impart something a bit different. The tops of bowls attract attention and thought needs to be put into how these surfaces will be treated. Frequently I burn this area so that the surface contrasts with the cleanly sanded wood’s natural colour. Contrast can be a great way to bring attention to areas that may otherwise escape the attention of viewers. 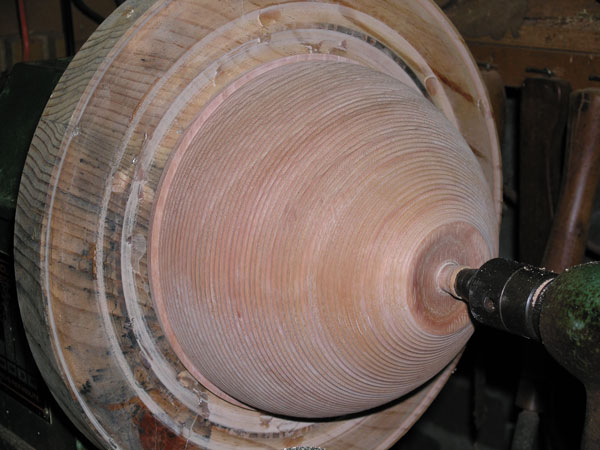 8. The spigot on the base is removed after reversing the bowl.

To remove the spigot left at the base you may reverse the bowl onto a vacuum chuck, but as I don’t have one I used a wooden disc fitted onto a faceplate which has often served as a carrier. This time, I simply rested the top surface onto the carrier, pushed and locked the tailstock up to the base then wound the quill out far enough to hold the bowl firmly in place. Marks left from initial rough turning were used to centre the form on the carrier [photo 8].

The bottom of the bowl was turned and sanded leaving a small stub, which was hand carved away later. Residual wood was reduced with a hand scraper then sanded. This process could also be refined using heat sensitive glue to fasten the bowl onto the carrier. So many choices! The bottom line is to use the technique most suited to your level of skill and devices available to you.

9. A textured pattern is applied to the lip with a pyrography tool.

In this series I chose to burn a textured pattern into edges and faces of rims. I use one of those Ironcore pyrography tools that have been around for decades. They’re not fancy, but you can shape the burning tips into any shape you wish [photo 9]. This spiral pattern isn’t my own design, but it certainly transforms the surface from a flat burnt one into something a bit more interesting.

Once finished the bowls are put aside to dry for about two weeks in summer or a bit longer in winter. If you heat your home, the lounge room is a great place to dry work and you get to see forms distort from one day to the next.

If you’re a scientific person, you may choose to weigh the bowl periodically to find when the weight stabilises. This indicates EMC (equilibrium moisture content) has been achieved. This simply means the bowl contains the same amount of moisture as the air in your environment. If you’re less patient you may choose to ‘neuc’ the bowl in your microwave oven.

I have found several zaps of lower heat let the bowl adjust to the sudden change to its comfort zone. Leaving the bowl out of the oven to cool allows moisture to evaporate, which is the aim of the exercise. Each species will react differently, so be willing to experiment and seek advice from others who have also tried. Woodworking discussion forums on the internet are a good source of advice. 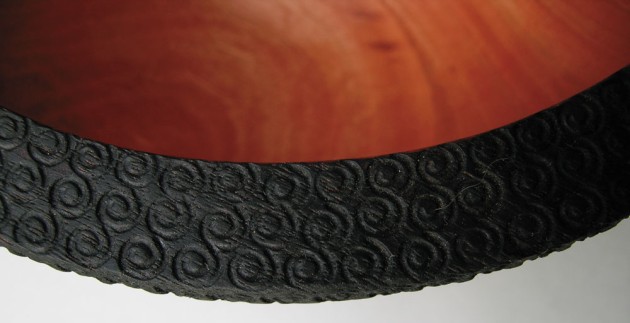 10. The oil finish brought out the rich colour which contrasts with the rim.

Once satisfied the wood was dry, I settled on an oil finish [photo 10]. Many finishing oils are available, sold under different titles. I prefer oil that can be brushed on, left to dry over night and its excess wiped off later. Some timbers require repeated applications before the surface no longer looks dry after a couple of days. Experiment to see what works best for you and the wood you’re using.

Making the most of the opportunity I showed finished bowls to students along the way, hoping they’ll convert trees they’ve seen cut down around them into bowls or other items ready to provide visual, tactile or functional pleasure.

Andrew Potocnik is a Melbourne based wood artist and teacher, learn more at www.andrewpotocnik.com