The four-slab table top was from a fallen jarrah tree I milled in Baldivis, WA probably 25 odd years ago. I never did anything with it because no matter how you looked at it, it had too many defects to warrant working on. The tree had so much gum vein you’d wonder how it ever stood upright?

In Christmas 2015, having had enough time in front of the telly, I moved to the shed for something to do before returning to work. I took another look at the old tree and, based on the thought process of ‘what the hell’, it was given another chance. I figured that there were four slabs that, with a lot of work, could become a tabletop, so that would be the project.

In keeping with the theme of using resources that I think are underutilised, the base design came from materials consisting of railway sleepers once used on a rail line in the eastern wheatbelt of WA and a power pole that once carried power in the great Southern region of WA. 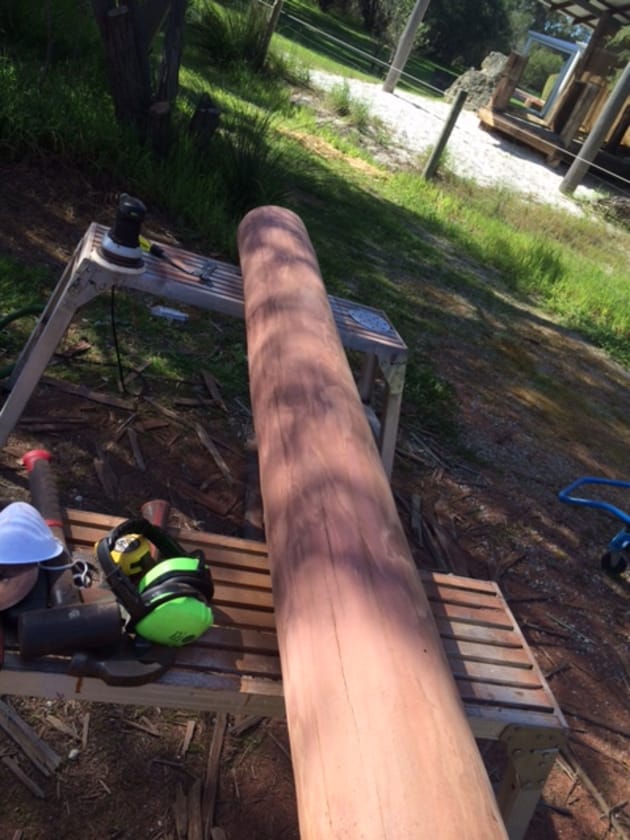 I purchased the pole, which was just on eight metres long, from a contractor who takes down the old lines in the state for the princely sum of $30, and the sleepers from a farmer who had the hindsight some 50 years ago to stack them in a corner of his farm, at a cost of $40 each. The timber still had a lot to offer and the history it carried was priceless.

The piece itself took a lot of time to build – I was back at work long before it was completed! With so many defects in the top, two pack fibreglass not only filled the crevices, but helped keep the timber together.

On the underside timber ‘transplants’ were added to fill what was no longer there. It was also a very physically demanding project due to the sheer weight and size of the materials used. With the top measuring, close to 1800mm in width and 2800mm in length and around 42mm in thickness, just turning the top over was no mean feat.

I used a two-pack polyurethane spray finish, but covering a width that size and obtaining an even finish is challenging to say the least, especially doing it five times!

This is a big table and I wanted it to be accessible on each of the four edges so I angled the end supports to ensure no legs would be bruised or tears shed in sitting down at the extended family reunions. The sheer weight and mass of the base made the design work beautifully – unless you want to move it… 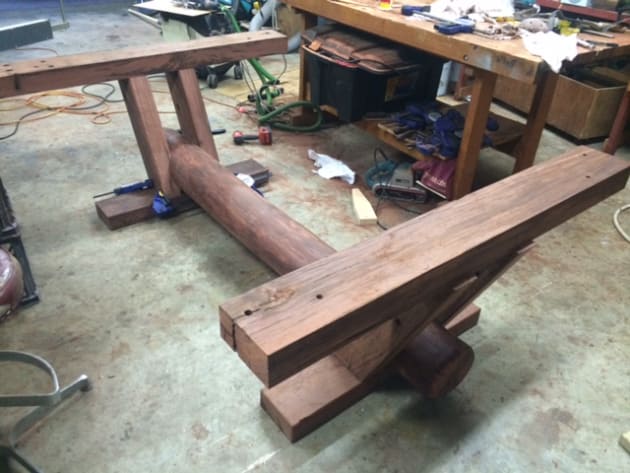 The table now lives in a family home made of rammed earth with a high cathedral ceiling, a wood fire and more. The family love and enjoy the table every day, especially on the occasions when it is filled with food, wine and friends. They tell me they have had as many as 16 people around it! For them it’s the joy of telling their guests of its history and the knowledge that the tables past will be carried on through their children and so on for a very long time to come.

What was an old tree that was lying in a paddock, a power pole that was seen as having little value and railway sleepers that may have ended up as retaining in someone’s garden, have now come back to life. All of them have a history but what's even better is that together they have a lot of history to come.

See many more images of how the table came together in the gallery above.