The general perception of woodturning is that everything made on the lathe is round. Multi-axis turning shows this needn’t be the case. Repositioning timber on the lathe outside its original centre enables the development of forms featuring a series of flattish angled planes.

Off-centre or offset turning requires remounting timber only about one centimetre outside its original location. Most often I find it sufficient to off-set the tailstock end to the outer perimeter marked by my cup centre, which is about 5mm. The headstock end is moved the same distance. Although small, this distance changes the arc through which the blank swings significantly and alters the resulting form’s outer radius drastically.

I planned to create a tall, slender, three-sided container with equally divided sides and a centre-turned interior but as the piece evolved I had to deal with several issues (including poor planning).

A blank was mounted between centres on the lathe and trimmed to a round cylinder, establishing overall dimensions and exposing features hidden within the timber. The cylindrical blank was then moved off-centre.

Aiming to create a tall form I messed up in my initial work by not doing the maths. For an equally proportioned form it is necessary to divide angles of the off-sets accurately. Imagine you are looking onto the top of a round end of the roughed form. You can see the centre created by the drive spur or the tailstock centre. Radiating from this centre point you need to mark three lines that are equally divided. To achieve an equally proportioned three-sided form, each needs to be angled at 120°. I didn’t do this accurately and wasn’t happy with the result, but read on. 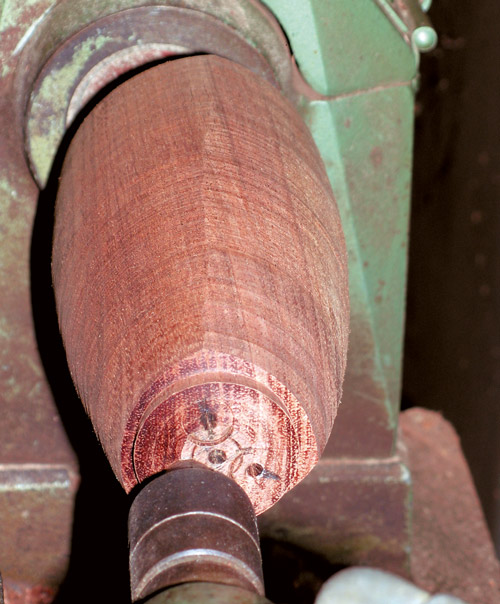 Once the three facets were turned to a sweeping curved profile (photo 1), the piece was returned to its original mounting. The wood was hand sanded whilst stationary. Using the lathe’s indexing pin you can lock the spindle and make the sanding process easier. Lock work at an angle comfortable for hand sanding.

For this piece you’ll need to use some elbow grease to get definition in each of those three facets of the turned form. Alternatively, you may use an orbital sander. If you try to sand facets as they spin on the running lathe you’ll round edges and lose definition where the planes meet.

It became blatantly apparent that proportions of the off-sets didn’t work, and the form looked horrible. So I started again on a shorter version, this time accurately marking out angles and distances of each offset. 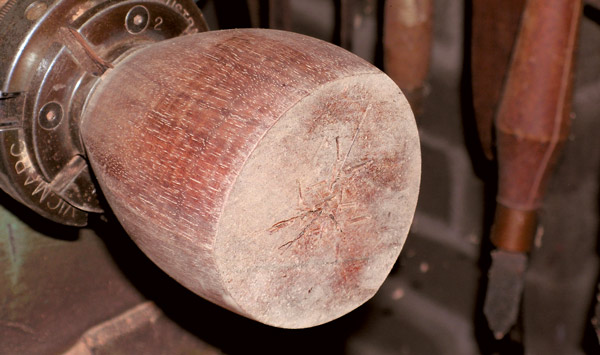 Photo 2 shows the markings which allow for each turned facet to be uniform in size and arc. A protractor will help in marking out angles.

Once all three planes were turned and sanded to a form I was happy with, it was time for the next step. The piece was moved into a scroll chuck enabling the form to be hollowed. I used a combination of tools, gouges and hollowing tools (photo 3) to remove unwanted material and create a flowing form that swept from the opening down into the bottom of the form.

Following sanding, a collar was made to fit into the container’s opening. I wanted a slight contrast in colour and a break in the form. For lidded containers I believe it is imperative that once the lid is removed, the container looks like a complete vessel, not simply half a box. 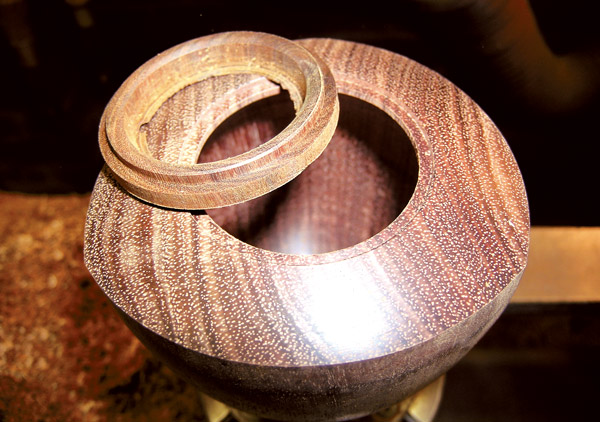 A collar of distinct, but subtle form and alternative material can fulfil this role. For this a piece of gidgee was mounted in a scroll chuck and turned with a step identical in dimension to one that had been cut into the rim of the container (photo 4).

This would be the underside of the collar needing to be turned and sanded to flow into the interior of the box. Remember, wood begs to be touched. We all love to explore forms with our fingertips, not just our eyes. 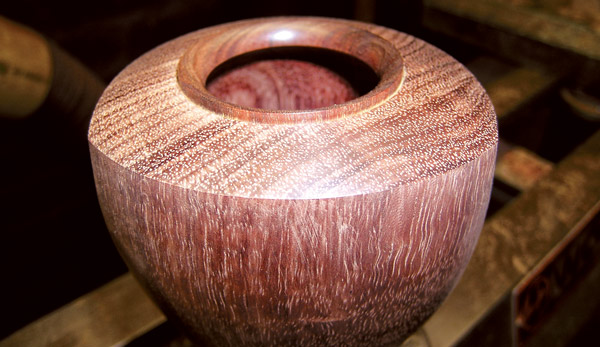 Once satisfied with the form it was removed from the chuck, glued into the box, shaped and sanded to complement the unlidded box (photo 5). 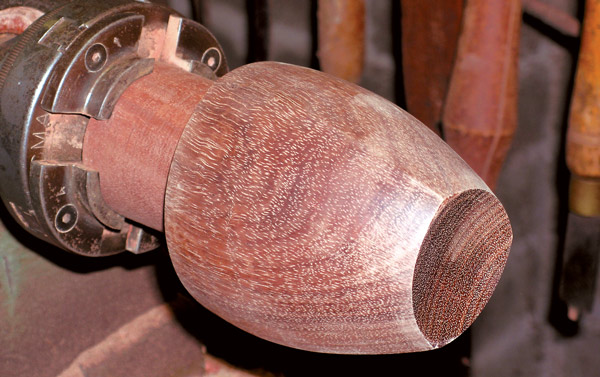 To sand the base I cut a spigot to fit the container’s opening, and hot glued it to a scrap block mounted in my scroll chuck (photo 6). The tailstock aligned and supported it during initial sanding. 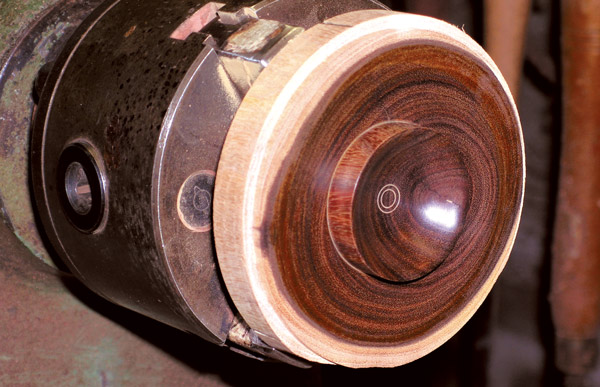 Another blank of gidgee was chucked and turned to create the underside of a lid. A step to fit into the collar of the container was turned (photo 7), sanded and textured with a chatter tool to add interest to its underside (see sidebar). 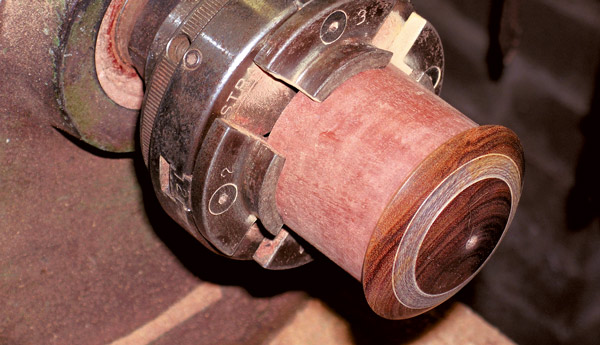 Reversed into a jam chuck (photo 8), I shaped the lid’s top surface. It too was textured with a narrow band of chattering defined with cleanly cut v-grooves. A centre hole was drilled ready to accept a finial to top this simple form.

For the finial I looked to the work of Michael Mocho, a turner from Albuquerque who cuts into turned forms to expose structures hidden within turned shapes. Although my attempts are insignificant compared to his, they allowed me to create something that appears to grow out of the lid (photo 9). 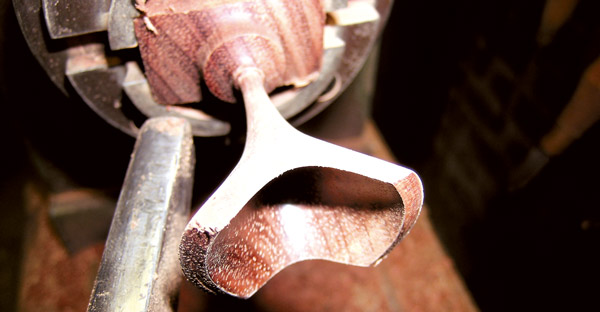 Looking through a cabinet where I keep all those bits and pieces that inspire, but lead nowhere just now, I found some guitar strings that gave me an idea. Small tear-drop shaped finials fitted to springy bases created a lid that adds an organic element to an otherwise rigid form.

And as for the first container? I couldn’t let it beat me—that would be wasting good material, something I can’t tolerate. The sketch that inspired this design was of a tall and slender form, so I went back and re-worked the original idea.

After turning a plug to fit the container’s opening, I remounted it between centres then retraced the steps perfected in my second container attempt. This time I ensured offsets were calculated, running down to a slender base, much smaller than the original attempt. From here I followed steps identical to those in creating the shorter box, but the finial needed a different solution.

Again I looked to Michael Mocho and experimented with another aspect of removing from a turned form to expose its internal structure. A simple sweeping form cut from what is essentially a trumpet shape introduced an asymmetrical element. A drum sander removed unwanted material from the turned ‘trumpet’. Rounding interior surfaces of the finial required a cutter fitted to a Dremel, and yet more elbow grease. This time I felt a less organic form was required to finish the lid, so I settled on a simple turned spike fitted into a hole drilled into the centre of the finial. 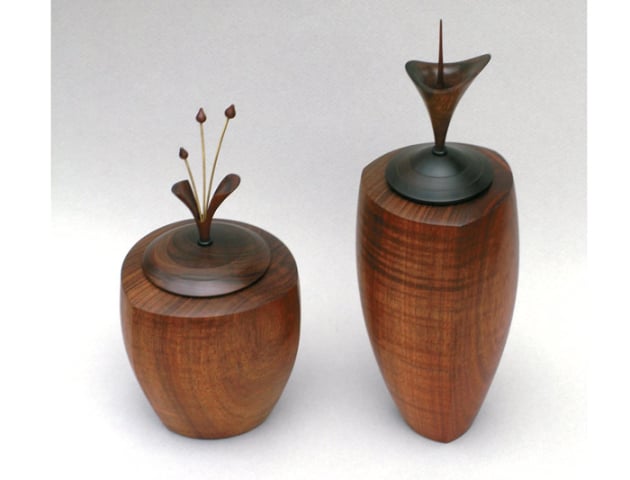 Inspiration can lead to new works but all too often several test runs are needed to develop the concept into a successful
final piece. If you have an idea that doesn’t work out the first time, don’t give up. A second, third or fourth attempt may
well open new directions and lead to a successful resolution.