In the great pantheon of woodworkers, from Nakashima and Krenov to contemporaries such as Brian Boggs and David Upfill-Brown, you consistently find most belong to a particular type of woodworker, which we’ve come to refer to as a ‘designer maker’. This captures the essence of what has drawn me into the field. You’re both – you design, and you make.

And yet when woodworkers come to both the study and practice of their craft, their efforts lie almost exclusively on the maker side of the split.

When you think of a Maloof chair or a Krenov cabinet – it isn’t purely the workmanship you are thinking of. It is the lines of the piece, the relationship between the parts, a unifying language in the way parts meet or the way a particular joint has been expressed.

It is the relationship between the case of a Krenov cabinet and its legs. It’s his contemplative compositions of the interior of the cases. It is the disjunct between Nakashima’s live edge top with his considered, highly orthogonal bases. No doubt it is also the way these have each been crafted, but without the design element, the work is anonymous.

For many woodworkers, design is seen as this sort of ‘magic’ that you either have or you don’t. As a result, many woodworkers produce the most incredibly crafted yet rudimentarily designed pieces. How can we get past this? Here are some key points.

1. To be a designer/maker you need to focus on both parts of that phrase equally.

Most woodworkers can name their top five makers...but naming the top five designers is not, I’ve noticed, so easy for most.

Why is it, as designer makers we’ll spend hours on YouTube how-to videos, or go to masterclasses learning how to do a particular skill, why will we discuss to death whether to cut tails or pins first or whether micro bevels actually do anything, but we
don’t spend the same amount of time learning design skills? 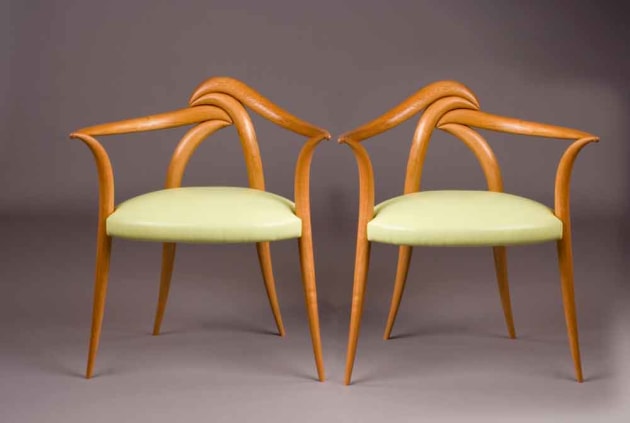 For me it is a shame that the furniture design world has become dominated by fast fashion and the designer who draws but cannot make. As designer maker woodworkers, we have the advantage of intimately knowing our medium and our process. I would like to see designer makers gain greater skill and confidence in their ability to design, so that we can retake the conversation about what is a good piece of furniture and why.

2. Design is not divine inspiration, it is a skill that can be learnt and developed.

As someone who has been taught to design, and someone who teaches design, I can assure you that design is not mystical. It is a skill that can be taught, just as cutting to a line with a handsaw can be taught. Yes, some people are innately good at it, but everyone can learn how to do it with time, focus, application and an open mind.

Students in their first year of design school have no clue but are hungry to learn. I really think that’s the only difference. The same students after five years will be trained design professionals.

The difference between the start and the end is like primary school and university. Over those five years they don’t teach you how to better commune with the gods to access all the good ideas. They teach you how to design.

3. Ways to start to honing your skills as a designer.

Design school methodology generally involves a study in design history. Most contemporary woodworkers work with some elements of the modernist school of design in their work but very few will know anything about the Bauhaus, for example. It’s sort of like starting a rock and roll band but never having heard The Rolling Stones. Or Robert Johnson.

If you’re practising as a contemporary designer, you should have a working knowledge of the history of the Modernist design movement, and of its luminaries such as Mies van der Rohe, Alvar Aalto and others. 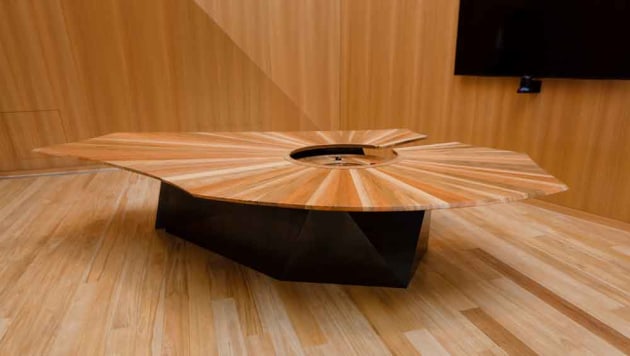 Adam Markowitz’s Hanging Studio Table was designed to reflect and harmonise with its surrounds and fulfill a function as a meeting table for large and smaller groups of people. Photo: Ben Clement

The critical thing in studying the history of design is to cast your net wide. Most woodworkers, and anyone who takes their chair design reasonably seriously, will be conversant with a range of chair designers. You may know the names of Finn Juhl, or Grant Featherston or Hans Wegner but what about the key figures in jewellery design, typography or graphic design? These designers are speaking the same language. Their tools are different, but when Nakashima was making his furniture, he was not working
in isolation. He was part of a school of thought that was drawing inspiration from a whole host of other disciplines. The point is, follow your contemporaries but study other fields too.

One of the main focuses of design training is to learn how to talk with the language of design. To start to consider and understand how elements within a design relate and why.

An analogy is composing a piece of music. You have a melody which is perhaps your main line of thought, which might be sung or played out on a guitar, but it is supported by a specific drum riff or a bass line. If you change these up the whole song changes. Bob Dylan was almost strung up for electrifying the same songs! Each part is considered in relation to the other parts – there is a reason why the parts are composed one way and not another. The same applies for a piece of furniture. Every decision you make, from the joints to the edge treatment, to the choice of finish, needs to relate to a conceptual process that is driving the entire design.

Learning how to develop a consistent conceptual methodology that unifies your design approach is a skill that is honed over time.

4. Learn to give and receive critiques and feedback.

Another critical element of design teaching is the idea of critiques. In a design school you are subjected to continual review, in a formal setting, whether by your peers or by your tutors.

Usually once a week you will trundle in with your design, and be given some guidance and feedback. At certain points in the semester, guest critics will be brought in for a formal presentation and review.

The feedback can be savage. I’ve seen plenty of students on the verge of tears. Some critics don’t hold back. I’ve let rip before – generally when I see a lack of application rather then poor decision making. The point is not to destroy the student’s design but teach them to be self critical, self reflective and also to trust their judgement, and learn to defend it.

My favourite thing to happen as a teacher of design is when a student listens to my advice, digests it, thinks about it, but then decides to follow their own path. As a result they will have far more ownership of the outcome and often come up with something even better. That’s a success.

I would encourage you to not design in a vacuum, but arrange an evening or an afternoon with some of your peers who you respect to have some beers and hammer out your designs. It’s one of the advantages of being in a shared space. It’s very easy
to get convinced by your own bullshit when it’s midnight and you’re by yourself running on coffee and music. If you’re part of a crit session – don’t say something is amazing if you genuinely don’t think so.

We can be very encouraging and positive as woodworkers, which is great – but sometimes I think this can hold us back as a design community. There’s a lot of well- made ugly things out there. But be constructive in your feedback. Say why. Often formulating an intelligent explanation of why you don’t like something is as insightful for your own development as it is for the person receiving the feedback.

As someone receiving feedback, don’t take the criticisms personally. It’s easy to get defensive. If the person giving feedback really didn’t care, they would just say ‘it’s great’ and move on, as that’s the path of least resistance. That’s what most of us do. And like the example with the student, sometimes the best response is to consider the feedback, and then not agree with it. That’s okay too.

I find it better if feedback sessions are one-on-one or in a small group, as people aren’t grandstanding, they’re being honest. This is not an encouragement for you to go on someone’s Instagram feed and tell them their design is rubbish. The feedback has to be requested.

Learning to be better designers as well as makers is something we all can do by following certain processes, much as we do to learn basic techniques and skills for making. 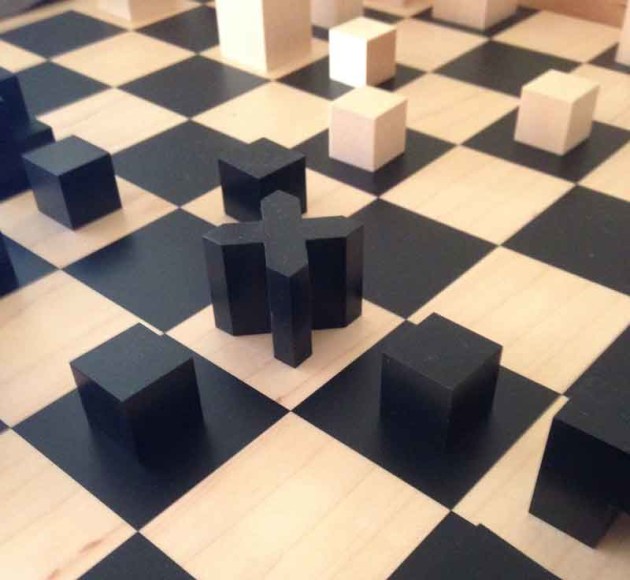 The chess set designed by Josef Hardwig whilst he was at the Bauhaus in 1924 is a perfect example of a consistent design that has cast off the idea of ornately carved knights and castles and looks to a more contemporary expression of the pieces and the way they relate to each other.

An Exercise in Design

When I was at the Royal Academy in Denmark I was asked to design a chess set. This is a great exercise you can set yourself with the following criteria:

This excercise distills many of the core ideas you’re faced with when designing furniture. You might be resolving the intersection between a crest rail and the frame, but that detail needs to be conversing with your entire idea of ‘what is this chair about’.

A key point here is the idea of a conceptual whole, influencing your decision making throughout the design process. Having a genius idea is really only a fraction of the work in design. The rest is in the fine resolution which is not a series of further moments of inspiration, but rather an uphill slog of considered and reflective decision making. It is hard work.

The best designers are not the ones that come up with the million dollar idea, but the ones that can take that idea and then refine it to a point where you look at it and say – no more can be added or taken away.

Adam Markowitz is an architect and designer maker in Melbourne and was profiled in AWR#98. Adam's article was a based on a talk he gave at AWR L!VE: Tools for Design in 2018. Contact him via www.markowitzdesign.com or Instagram @markowitzdesign