How to Make a Hexagon Box

A while back, my friends at Shukokai, a woodwork group in Tokyo who promote the use of traditional hand tools, invited me to participate in their annual exhibition. I had to courier my exhibit to Tokyo, so size and weight were constrained.

As I contemplated options, I was drawn to a style of parquetry boxes that I’ve seen on occasion in Japan. The design I developed is hexagonal, with an outer box that drops over an inner box and fits closely enough that an air cushion controls its fall. The lines of parquetry squares flow from the top down and around the sides.

For the air cushion to work, the gap between the boxes needs to be 0.3–0.4mm and the hexagonal geometry needs to be accurate all around. The outer box is made up of 60° oblique parquetry squares of red cedar (Toona ciliata), 20mm between opposite sides and with the grain parallel to one edge. Each parquetry square has the grain 60° to each of its neighbours. 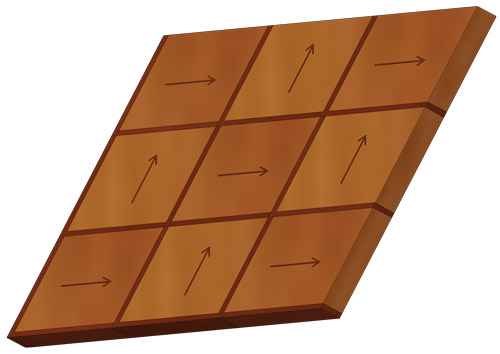 Cedar is highly reflective and in this configuration varies as the box is rotated. To reduce the effects of wood expansion and to emphasise the facets across the outer box, I put a 1mm thick veneer of wenge (Millettia laurentii) between each square.

The inner box is solid cedar with a three piece base that should even out expansion. All edges are mitre joints with hidden splines so construction isn’t visible.

A quartersawn board of red cedar worked well. The simplicity of the grain, the subtlety of the medullary rays and the effect of light on the parquetry are features of the box. If you use a backsawn board or a species other than cedar, test the interplay of light on parquetry before you start.

The top is 10mm thick. As the process of making the parquetry requires flattening the board twice, I used 15mm cedar stock to give a comfortable allowance to finish at 10mm. For a harder and heavier timber, I think you could aim for an 8mm finish from 13mm stock. 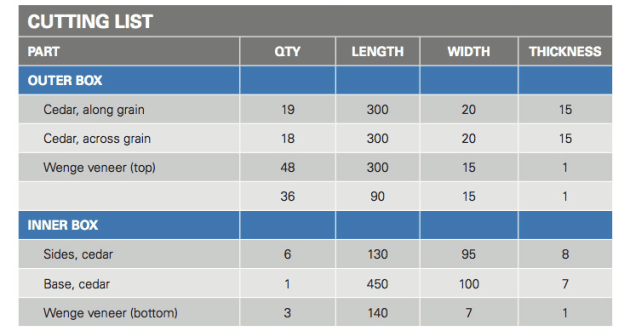 For the parquetry, prepare two 15mm thick boards and cut a set of 20mm wide strips (after the edges have been squared on a shooting board). Half of the strips are cut along the grain and half (from the second board), across the board at 60° to the grain direction. I had a 260mm board which meant that I could cut 300mm strips on the 60° angle. You can then cut the strips at say, 21mm and shoot the edges so they are square.

The strips are planed in a group, which keeps them to a consistent width. Glue a 15mm wide veneer on one side of each strip and then re-shoot so strips are an accurate 20mm wide. Check the overall width for 13 strips for the top and eight strips for sides, so they are a multiple of 20mm. While I used handplanes throughout this project, a thicknesser could reduce the effort if you can avoid damaging the strips. 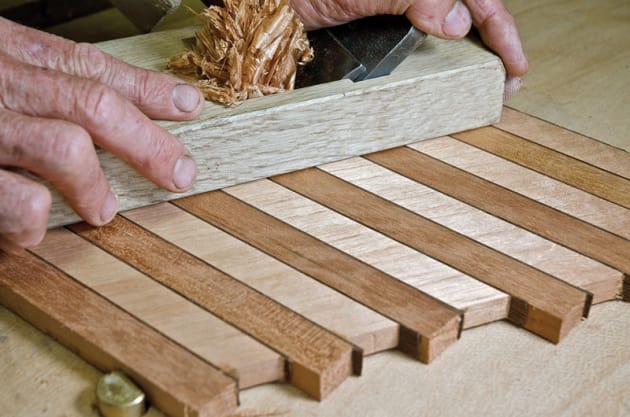 Glue 13 strips for the top (or eight for each side), staggering them so the side made up of the ends of the strips is at 60° to the straight side. ensure the planing direction of strips with a similar grain direction is consistent. This makes it easier to plane the glued board. Roughly surface the top and the bottom when the glue is dry.

Cut the edge of the board at 60° to the straight edge. Shoot the edge and then cut the board into 21mm strips, making sure you maintain the 60° between sides and shoot each new edge. The accuracy of this angle is important to the geometry of the hexagonal top. 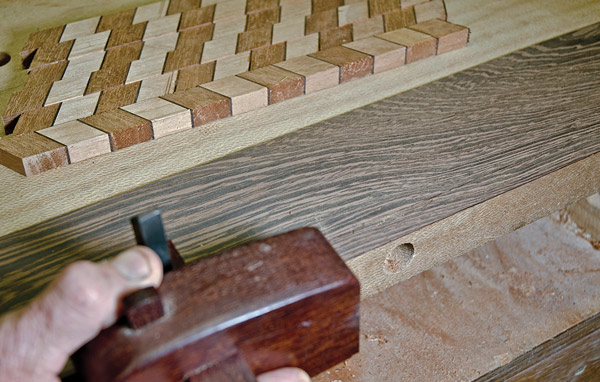 Cut 15mm strips of veneer. These were first marked off with a cutting gauge. Glue the veneer onto the shot edge and then shoot the strip to an accurate 20mm. check the 12 strips together make up 240mm. 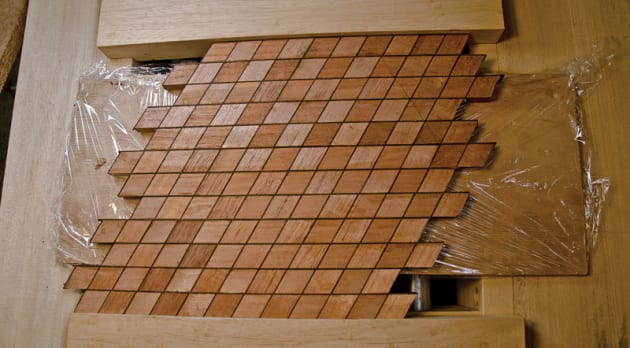 Arrange the strips in such a way that a hexagonal top can be cut. Things to check include:
• Adjacent squares have grain at 60° to each other.
• Joint lines are straight.
• Opposite sides of top are 240mm apart—check three combinations.
• Find the centre of the top and draw a circle through the six corners of the top.
• Check grain directions to avoid 180° reversals so planing the top is easier.
• Dry clamp strips to ensure geometry and flatness can be maintained under clamps. I have an arrangement built into a bench with two pipe clamps and long jaws that worked perfectly. Gluing six rows at a time is simpler to control.

When you are happy with the dry- clamped top, disassemble, glue and reclamp. Accuracy is critical. plane top and bottom surfaces down to 10mm. Mark and cut the hex sides and plane the edges down to the marks. check the sides are all the same length.

Make the six sides using the same process. Initially, I made the sides with six rows of parquetry. However, I didn’t like the proportions of the finished box and cut the bottom row off.

Note the grain orientations of the six sides are all the same. Make sure from the first side you glue, that the grain pattern flows correctly from the top of the box. 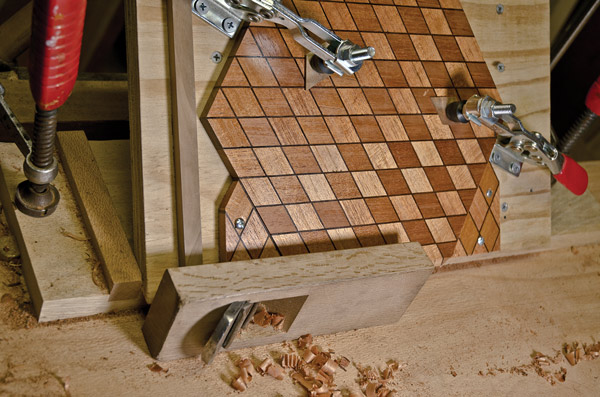 I used these jigs to mitre the sides and the top. Check fit of joints and accuracy of patterns over the joints. Select one side as a reference and double check the sides are square to the top and mitres are exactly parallel.

As mitres on the other sides are cut, check mitre edges against the reference side . It is critical they are all the same and this test can detect very small variances.

Cut the slots for the splines

Clamp the top and then the sides onto the appropriate mitre jig so the mitre face is flush with the top of your router table. Set up stops and the fence and cut a 2.5mm deep slot using a 1/8” router bit. I’ve found a spiral downdraft bit works well. Take care that spline slots run parallel to the edge of the mitre. 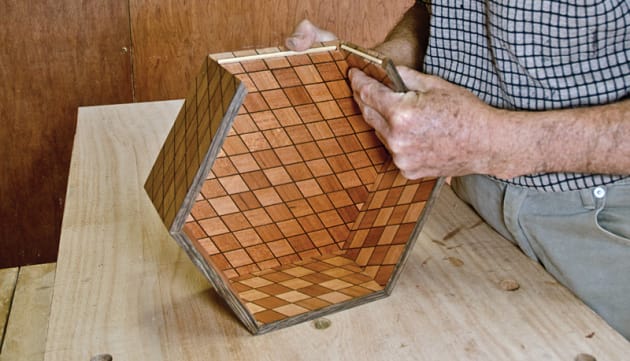 Finish plane the top surfaces, relieving the edges a little. It’s a good idea to apply finish to the outer box before making the inner box as the finish will affect the internal dimensions slightly.

Fit sides of the inner box

You now have to plan for a very close fit between the two boxes. My approach was to put a couple of pieces of electrical tape across the inside of each side joint of the outer box.

1. Cut a 60° mitre on each edge of the sides.
2. Check mitre edges are square to the bottom and distances between mitre edges are all the same (hold each side against a reference side and feel which edges protrude).
3. Try and fit the sides into the upturned outer box. Hopefully, they won’t fit initially.
4. Using the mitre jig, plane the mitres back gradually (keeping the length of the sides uniform and edges square to their bottom) until the sides will just fit into the outer box.
5. Insert spline slots into mitre faces. 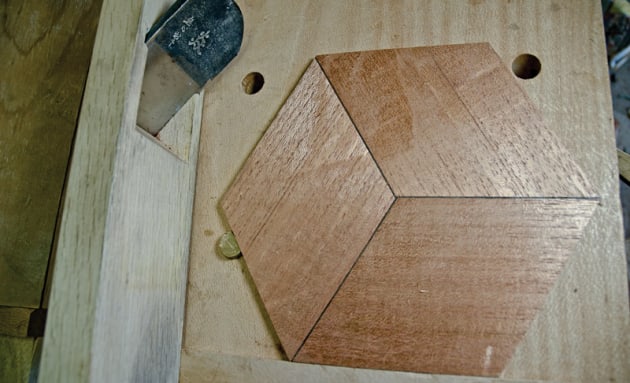 To this point, the box should expand/ contract uniformly in any direction. To keep this advantage, I prepared a three piece base:
1. Measure the maximum diameter of the base from the sides as they sit in the outer box.
2. Mark and cut the three pieces, a little over-size
3. Glue veneer along one side of each piece.
4. Glue the three pieces so grain runs around the base.
5. Use a protractor to mark the six corners.
6. Mark and cut the six sides and cut a rebate around the base so it can fit into the slots in the sides.
7. Fit the splines and glue the inner box, checking it will enter the outer box as expected.

The moment of truth