Chair ergonomics: how to make a comfortable chair 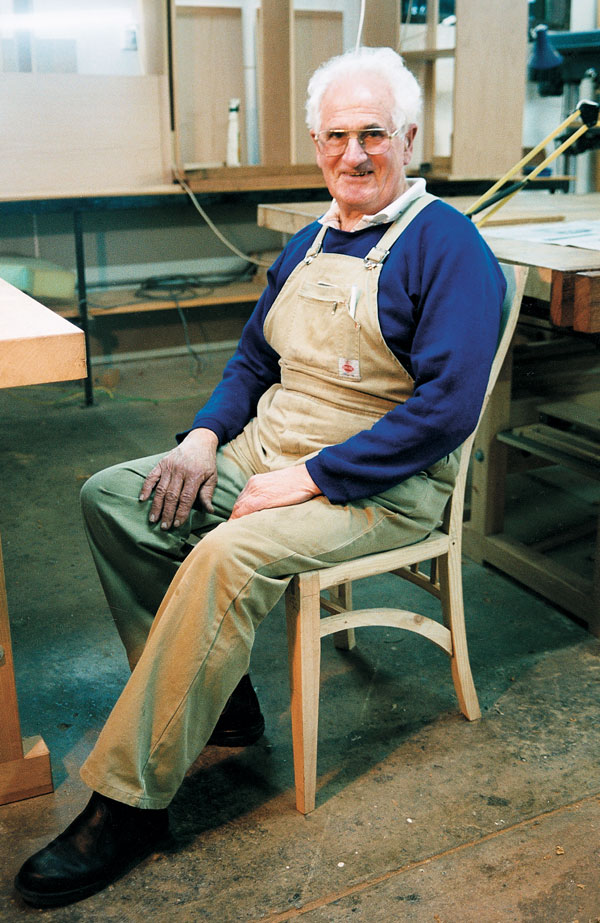 Above: Bill Dinning tests the comfort of a mock-up of a chair he designed during a part-time course at the Sturt School For Wood in Mittagong, NSW. Bill’s design was inspired by a chair made by New Zealand maker James Dowle.

To me, a basic requirement of a good chair is that it be comfortable. Apart from the most immediate physical information our bodies give us when we sit in a chair, all the technical information we need in order to design a comfortable chair is available. Industrial designers use it when comfort is paramount – for example for aeroplane or motor vehicle seats, or office chairs.

Humanscale 1/2/31 is an ergonometric guide worked out by Henry Dryfuss Associates. This guide consists of a booklet and three stiff plastic, double-sided charts with a dial system that gives a host of different measurements when turned. For example, on chart 2A, a seating guide, you can dial up, say, a secretarial chair for any of the following: large male, average male or large female, average adult, average female or small male, or small female.

Each of these five categories yields a different set of numbers in small windows on the chart for things such as seat height, seat angle, seat depth, backrest height, backrest angle and so on. Even more useful, however is the part of the booklet devoted to seating considerations. This has sections devoted to the seat, backrest, headrest, neckrest, armrest, footrest, chair and body angles and chair mobility. Each of these is subdivided to cover all the major measurements you require. 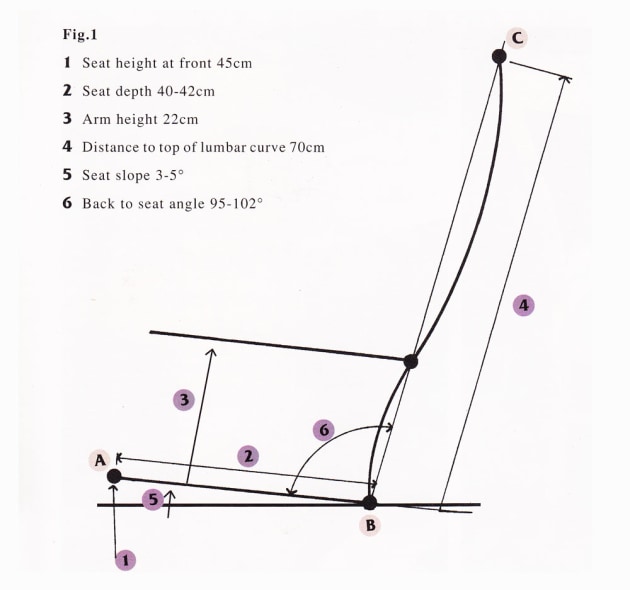 These figures should only, however, be used as a starting point. They were published in 1974 in the US, and probably relied heavily on military information dating back to World War II. If experience in Australia is any guide, people have changed considerably since then. More up to date statistics may now be available. What this ergonomic information gives us are points in space that are effectively fixed for any particular person. If we are designing a general chair for an ‘average’ person, the points are as shown in fig.1 above.

Another basic dimension you need is the chair width, for which Alan Marks2 recommends 460mm in the front and 360mm at the rear. If the chair has arms, you will need around 490mm between the arms according to Marks. I have reduced these measurements somewhat, using about 430mm between the arms and the front legs, though this is probably a bit on the small side.

If you use a padded seat, you must remember to calculate everything from the compressed position of the padding – the position it is in when someone is sitting on it. 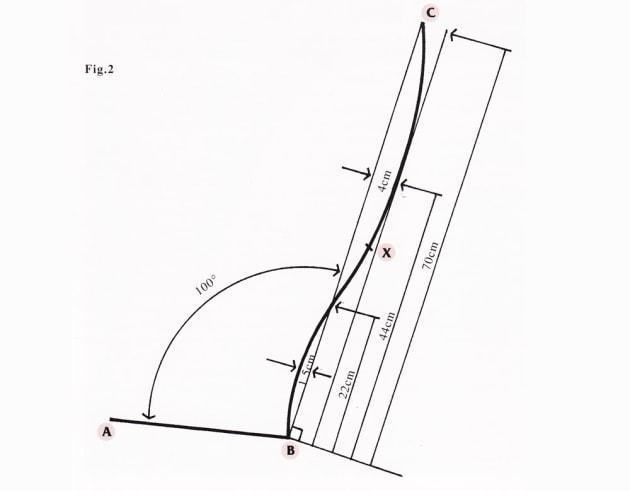 The final and most critical information relates to what is the heart of a comfortable chair – the lumbar curve of the back. Points B and C in fig.1 fix the two ends of this curve in space, but you need to know how to draw the curved line that connects them. Marks recommends the following, as shown in fig.2.

Of course, the back does not have to be 700mm high. It can be lower, but if it is, the top rail should still be positioned so that it falls on the curve drawn for the 700mm height. It could be at point X, for example. If so, the vertical slope of the top rail should follow the line of the curve at this point. If the chair has a number of vertical back slats (the number should always be even so there is not an odd centre splat running right down the bones of your spine) these should be arranged in a curve from left to right. They will follow the curve of the top rail at the top (the radius of this should not be less than 1015mm) and a curve at the bottom where they mortise into the seat or bottom rail so that the slats form a radius of between 300–450mm at waist height.

This is all the basic information you need. In order to use it to draw up a design, take a big sheet of paper, or a sheet of 3mm MDF, and on it mark a horizontal line to represent the floor. From this measure and mark out points A, B and C, and draw in the lumbar curve between joints B and C. If the chair is to have arms, draw a line to represent the arm height (remember to consider what the chair is to be used for). For a dining or desk chair, the arms have to allow the chair to be drawn up to the table or desk without the arms either hitting it or jamming your fingers into or under the top. Once this is done, you can design any chair you like to fit around these points and lines. 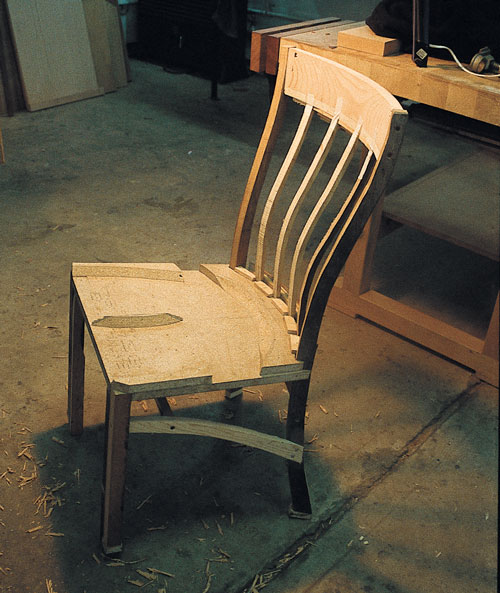 Drawing it on paper is only the beginning however. Once you have a starting design, the next step is to build a rough mock-up of it, one that’s strong enough to sit on. This will allow you to test your figures (as I said, those provided are only a starting point) and adjust them. The mock-up will also allow you to see the chair as a three dimensional object rather than as a two dimensional drawing, so that you can begin the difficult process of making it work visually as well as ergonomically. This is also an opportunity to work out your joinery. 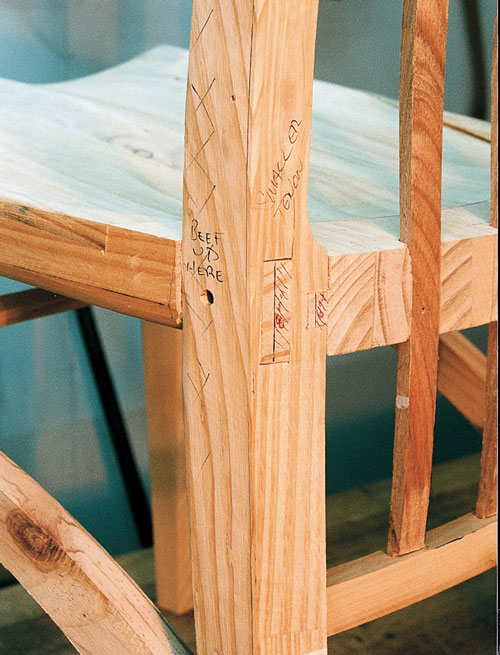 I can offer some tips on adjusting your figures. You really need to be able to test variations quickly. You can’t really try one version, then take a day or so to make an alteration before trying another. By the time you get to the second one you will have forgotten the feel of the first. Even an hour or so between trials is too long.

So if you want to test the effect of say different seat heights, place a stack of, for example, 4 x 10mm thick boards under your feet when you are sitting in the chair. Relax and feel the result. Then get a friend to pull one board out and note the difference. Then in succession, pull the rest out. This will allow you to experience five different heights (it is the same as putting four 10mm discs under each chair leg, but quicker and easier). You will find that after a couple of runs through this exercise, you will quickly zero in on a most favoured position. 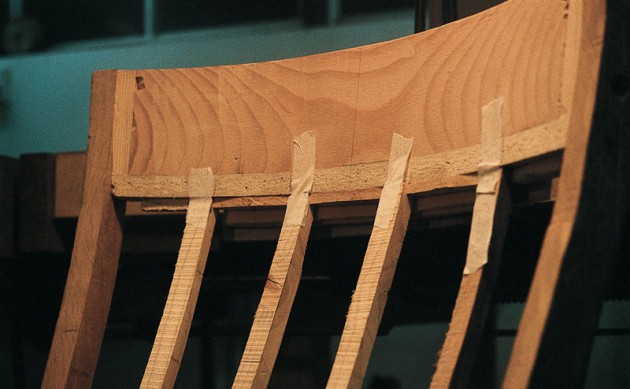 Similarly, you can check different seat angles by putting a small stack of thin boards (say 5 x 2mm boards) under the front legs and successively pulling them out. The seat to back angle can be adjusted by moving point B in fig.1 backwards or forwards as follows.

Make up your mock-up in such a way that you can drop different splats into spaces without having to screw or nail them in place. A rebate under the top rail, for example, with some spacer blocks glued to it would hold them at the top. At the bottom make up a series of 10mm thick concentric spacers of the radius you decide upon for this lower curve. Fix the rear spacer to the seat a little behind point B in fig.1. With all the spacers in place, the splats rest against them in a position forward of B, thus giving you a range of positions, as the spacers are successively removed, in front of and behind B. 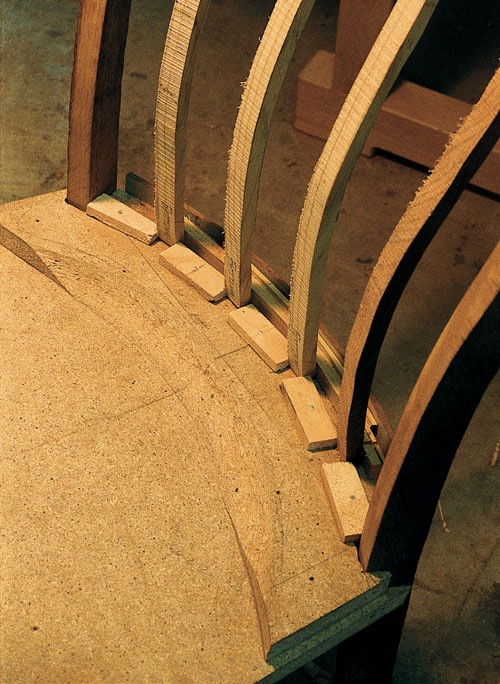 If you sit in the chair, you can try each position to determine the one you like best. You can also use the lumbar curve with different variations on splats roughly bandsawn from any handy spare wood. I make my splats about 22mm wide and about 12.5mm thick when cut from the solid (thinner than 12.5mm when laminated). The lumbar curve can be carried up and down as well as in and out. In my experience, the up and down variation is much less flexible than the in and out.

You will find that you quite quickly home in on what feels best for you. If you can do it, test your final prototype over as long a time as you can because what might feel like a lot of lumbar support initially might not be enough once you become used to it. You will also probably find a considerable variety of opinion, if you try all this out on different people, because we are all different. Even if we are of similar height and weight we can still have very different posture. This, of course, is the beauty of having a chair custom made in the first place. 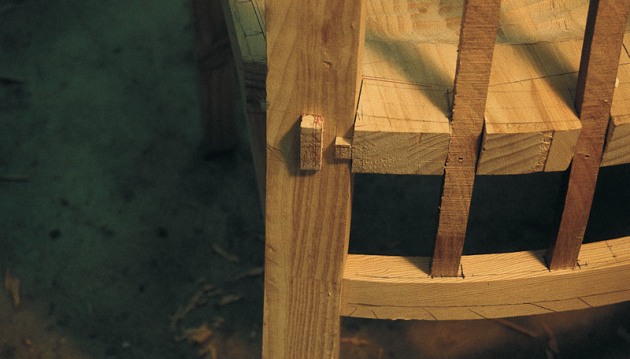 If you want to use horizontal back slats rather than vertical ones you will need to ensure that they too are positioned so that their point of contact with your back falls as closely as possible to the lumbar curve. This is much more difficult to achieve here than it is with the vertical slats. Normally chairs have horizontal slats that are either straight or have a backwards or concave curve. This is okay for the top slats, but the lower ones would probably give better lower back support if they curved forwards. But to get all the horizontal slats positioned to fall on the required curve and fit to the leg on either side would probably require a rather odd-shaped leg.

All the other variables in your design can be tested in similar ways. It might sound highly complex, but it doesn’t really take all that long provided you stick to the idea of a rough mock-up. 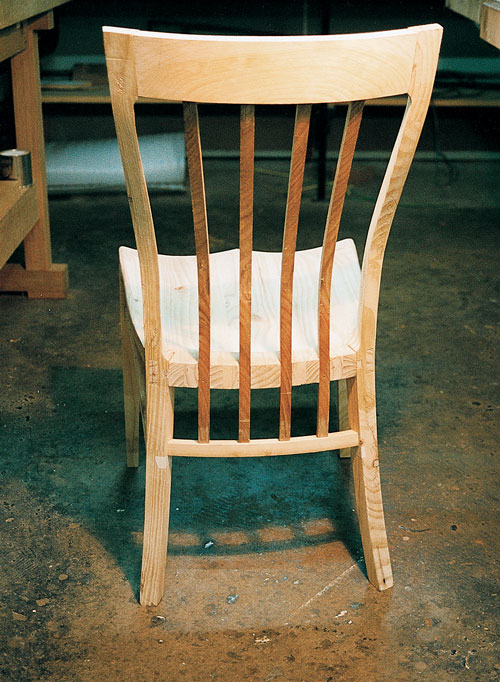 One final point is that I have considered all these variables individually, whereas they are actually interrelated. You will need to take this into account. Putting spacers under the front legs to alter the seat angle, for example, also alters the seat height at the front and while it does not alter the angle between the seat and the backrest, it does alter the slope of the backrest relative to the ground. You might find that you want to alter one of these but not the others. In this case you will need to pull your mock-up apart and perform some surgery before continuing your experiments.

With enough trial and error you will end up with a comfortable chair. Making it beautiful is a whole different ball game.