As the years go by most woodworkers collect more and more tools. No matter how many tools you have though, there are usually some that you use on a regular basis, your essentials. The others may come out for specific jobs but your main tools can usually fill in anyway.

For instance, a mitre box and special saw will do a great job but a mitre gauge and fine hand saw can also complete the task. A personalised tool box means that you can keep your essential (and valuable) tools dust free and portable. If you make it well you will also have a sample of your work on hand for potential clients to view.

The first thing I did was to lay out my main tools plus a few extras, such as screwdrivers and carving chisels. Spread out on a bench they didn’t take up much room at all. The plan was to keep the tool box as small as possible, so some time was spent arranging where things would go. This layout dictated the measurements of the tool box. A cutting list is included here but the measurements really are personal; the more tools you want to include, the bigger the box you will need. 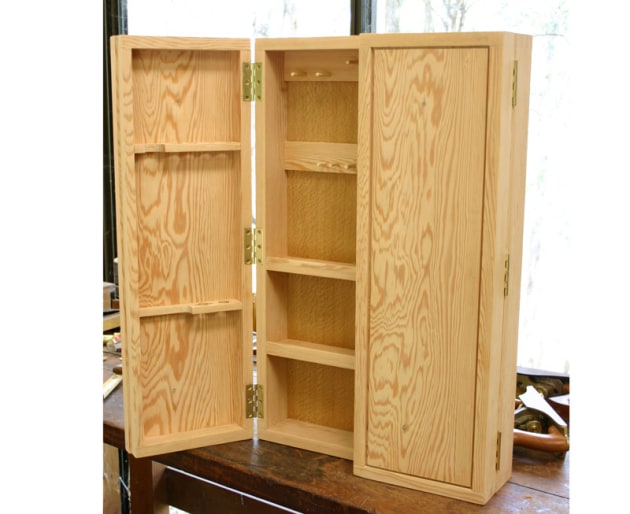 Both the main box and the doors are dovetailed at the corners. The depth of the sides was made to accommodate the widest hand plane in my kit. Added to the 65mm width of my low angle smoother was the 5mm thickness of a thin edge strip and a 4mm thick ply back plus a little extra to give an overall depth of 75mm. The doors are made with their frames on edge. Each frame is grooved to receive a solid timber panel.

I’ve always liked the look of oregon or Douglas fir with its warm orange colour and strong grain markings. Oregon is grown all over the world, but originally the giant forests of North America were the source of massive amounts of sawn timber. Old photographs show forests of enormous and absolutely awe-inspiring trees.

During the last 150 years large amounts of oregon have been imported into Australia. Most of it has been used for structural uses, however smaller amounts have also made their way into joinery. Old growth oregon has very fine annual rings and the wood is stable and easy working. A lot of this old growth material makes its way to secondhand demolition yards. I made the tool box from just one plank that I paid $40 for, not much when you consider the width and thickness of the timber.

Recycled wood has a story to tell. This piece of oregon had grown in another country, been sawn, shipped and then sat maturing in a building frame before it finally entered a wood workshop.

For my needs this slab of timber had to be resawn to boards 25mm and thinner. The fact that about a third of what was resawn developed splits and had to be discarded makes it difficult for me to recommend oregon for fine woodwork. Apart from this though, the selected material was easy to saw and chisel. 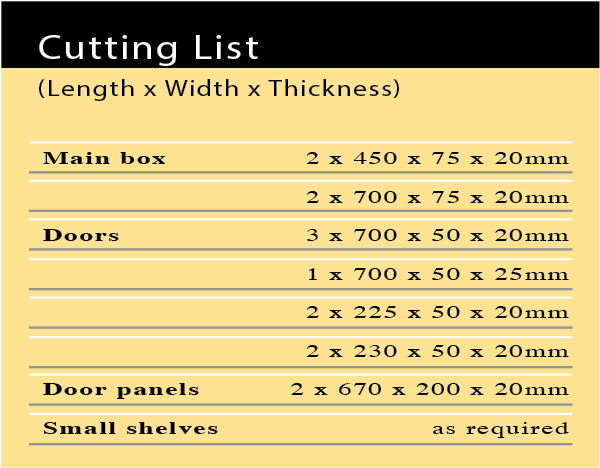 When I resawed the wood I tried to orient the grain to give quartersawn stock so it would be more stable. The only exception was the wood for the door panels which was sawn straight from the slab so the panels could be book-matched. The sawn sections were left for a week to settle and then planed to final size before being docked to length.

I don’t like cutting dovetails even though I know some people really get into it. Robert Howard, writing in AWR#11 about developing good techniques, once posed the question ‘Where is the woodworker who gets up at 5.30am to cut ten dovetails before breakfast?’ Amazingly I found myself getting up early a couple of times and actually going down to the workshop to cut dovetails before breakfast.

There are a lot of dovetails in this small box. A third of the way through I started wondering what I was doing; they just seemed to keep coming. The saw was blunt by the end of the job. I opted to use a hand jig to help guide the handsaw for the cuts and found it a huge help. This jig has a magnet which clamps the saw to a fence to keep it moving at the correct angle. Even so, the chiselling, which is still half of the job, has to be done freehand.

A commercially made router jig would make this work fast and highly accurate. Personally I didn’t want to buy a router jig because that would have been another tool in the shed — I’m trying to reduce what I’ve got, not add to it. If you plan on cutting dovetails regularly though I recommend you buy a router jig. 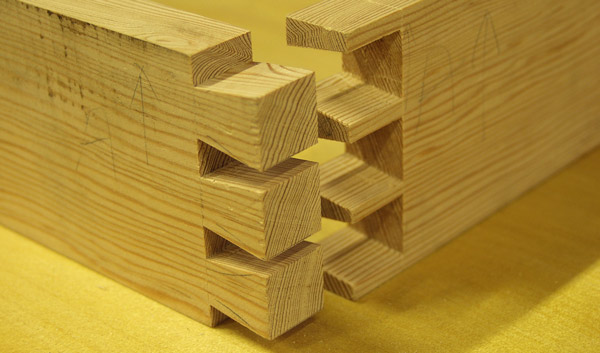 The components were sanded on their insides before cutting any joints, otherwise the thickness can vary and leave a gap in the joint. The outside is sanded after assembly. The tails were made first by sawing then using the drill press to remove as much waste as possible. The pins were then marked and worked. I cut a test joint on some offcuts before starting on the main job. A finished corner is shown above.

Once all the joints were cut the box was ready to assemble. A test fit revealed a pretty good match with the joins. Glue was applied, taking care to cover all mating surfaces, and everything tapped together. To spread the pressure of the clamps evenly small blocks of wood were cut and placed between the wood and clamp. These small blocks had cut-outs in them to match the dovetails.

Once the clamps were removed the box could be cleaned up and sanded. A 4mm (1/4”) deep rebate was routed in the back of the box to accept the plywood back which was cut and fitted. Holes to secure the ply were drilled later, after the shelves in the main box were fitted.

Once the main box had been made, the door frame timbers were measured and sawn. These were dovetailed at the corners and meet in the centre with an overlap; without this the arc of the closing doors would have required a huge clearance gap. The overlap also helps keep dust out. 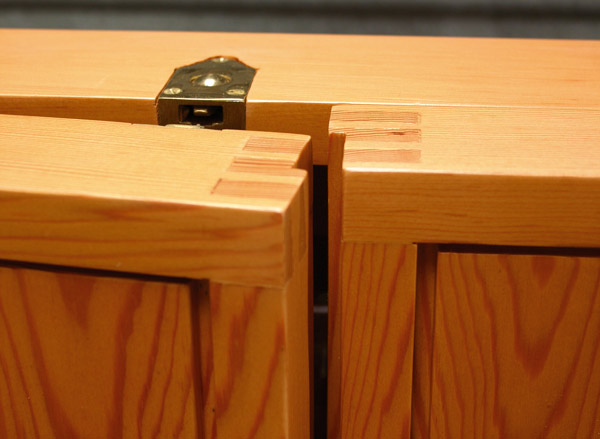 The panel measurements were then deduced, and a rebate made in the door frame. The rebate was cut with a router and rebating cutter. 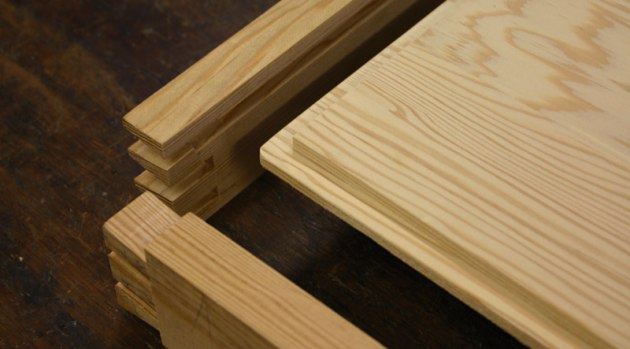 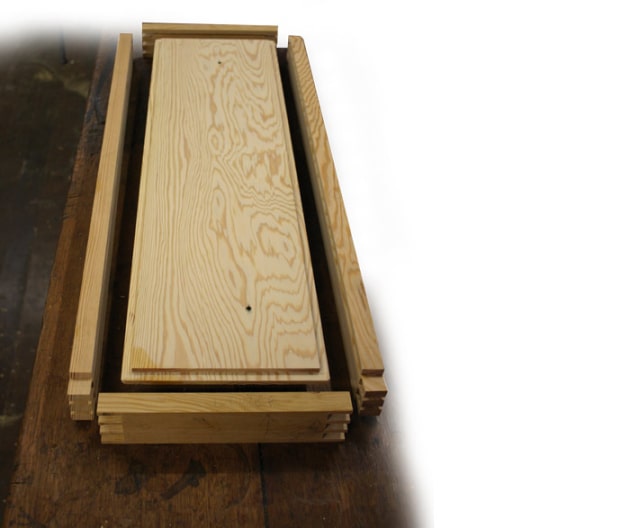 Everything was checked for fit and then the panel and frame were glued up. A little room was left in the groove to allow for timber movement. To strengthen things I glued half the panel in place, spreading glue along one long length and across half of the door rails.

To hold all the tools in place small shelves and pegs were fitted to the sides of the doors and main box. The shelves were made from 8mm thick oregon, and small lippings were added to prevent tools falling out. Thin bamboo dowels (bought as skewers from the supermarket) were added to lock things in place.

Holes were drilled to accept chisels andscrewdrivers. Some of the holes were elongated for wider chisels. Bamboo chopsticks were cut up and drilled and glued in place as pegs to hang tools from.

Three brass butt hinges are used on each door. They were fitted to the doors first and then, with the door resting in position, the corresponding locations were marked on the main box.

To speed things up the hinge recesses were first routed out... 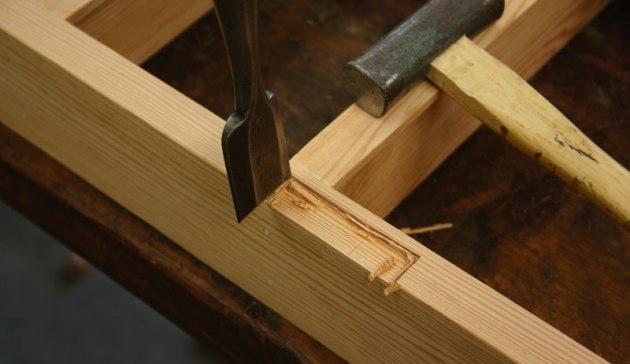 ...and then a sharp chisel used to achieve a clean, even housing.

To avoid screw heads fouling on the inside of the hinges I chiselled the hinge housing with a bit of a slope, getting deeper away from the hinge knuckle. The doors can then be mounted and adjustments made to gaps and fit .

With the doors on, the tool box is now virtually finished except for the final details, cleaning up and of course polishing. The back was next screwed in place—don’t use glue here as it is much easier to be able remove the back when you are polishing the piece.
I sourced some brass catches for the doors that use a button as a release. These required a complex housing to be made but they work quite well. Magnets or a suitcase-type clasp could also be suitable alternatives.

The panels in the doors had nail holes which needed to be dealt with. For this I went outside and found some twigs about the same size as the holes. These were de-barked and placed in the sun to dry out. The twigs were glued and tapped into the holes, then trimmed back to the wood surface. When completed they looked like small knots in the wood.

The piece was then ready for polishing. In this case it was given a coat of shellac and then four coats of lacquer were sprayed on. The box is now a permanent fixture in my workshop with the tools it contains in steady use.